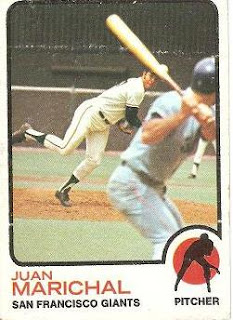 Zack Grienke's has had a remarkable start to the season and related to this Juan Marichal's name has resurfaced recently.
After Grienke's first 10 starts this year his ERA was 0.84, Similarly in 1966 Marichal had held his opponents to an amazing 0.56 ERA through 10 starts.

Marichal's accomplishments didn't end there. During 16 seasons mostly with the San Francisco Giants he tallied 243 Wins (with only 142 Losses putting him 101 games over .500), 52 shutouts (18th all time), and 2303 strikeouts. Marichal and Sandy Koufax are the only two pitchers in the last 60 years to record 25 wins in three different seasons. Marichal's 191 Wins during the 1960s was tops for the decade. Over the course of his career he compiled a 3.25 K/BB ratio (only six active starting pitchers can boast of such a ratio).

Juan Marichal hails from the Dominican Republic and currently is the lone Domican in the Baseball Hall of Fame. Pretty hard to believe with the number of Dominican stars that play the game currently.

Juan Marichal's rookie card is #417 in the 1961 Topps set. In recent auctions the card has sold as low as $23.49 for a very off center but otherwise good condition card. In several other completed auctions ungraded versions of the card went in the $30-$35 range. After the several Mickey Mantle's and a couple of Roger Maris cards the Marichal is among the most sought after in the 1961 Topps set.

Autographed Marichal cards falls in line with most lower tier Hall of Famers. The cheapest auto auction to complete recently was $10.50 for an 05 Donruss Signature Series sticker Auto. Last years Donruss Threads sticker auto #d to 25 (but crooked) went for $13.99. A much nicer 07 Sweet Spot Classic (gold stitching #d to 99 and NOT faded) went for $16.52.

Price quotes above are from ebay completed auctions and include shipping. Any links to cards are strictly to show an example of the card and are not a site endorsement.

1973 Topps Juan Marichal cards like the one above in crap condition can be had for a quarter or maybe even a dime. I think this one was in an 8 for a dollar bin.

One last note, for $60 Juan Marichal's Baseball-Reference page is available. Seems like a good deal for the right customer.

Email ThisBlogThis!Share to TwitterShare to FacebookShare to Pinterest
Labels: Baseball Hall of Fame, For The Collector, Giants, Hall of Fame, Juan Marichal

The 73 Topps set is full of awesomely bad photography. The Garvey is equally as bad.

Ted Merkywa was a relief pitcher for the Boston Braves. He pitched 5 years compiling 153 appearances a15-43 record 4.78 ERA and gave up 127 Home Runs in 347 innings. He only started 20 games and did not last more than 5 innings in any appearance.

Not really, but it sounded good right?