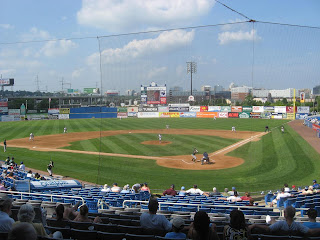 
Sunday was a beautiful day here in the Philadelphia area and the Phils were playing the ESPN night game so I took the opportunity to run down to Delaware and check out the Kansas City Royals Hi-A affiliate Wilmington Blue Rocks. The Blue Rocks hosted the Lynchburg Hill Cats who are affiliated with the Pittsburgh Pirates. The game featured arguably the two best third base prospects in the minors. Mike Moustakas mans the hot corner for the Blue Rocks while Pirates 2008 second overall pick Pedro Alvarez is gettting his first taste of professional ball as a Hill Cat. In this years Baseball America preseason Prospect Rankings the two were ranked 13th and 12th respectively overall and as the top two third basemen.
Moustakas is starting to heat up with 7 homers thourgh 51 games, 35 RBIs and a .265 batting average. Pedro Alvarez is only batting .242 but does have 10 dingers and 42 RBIs for the season. Unfortunately neither player contributed at the plate on Sunday as they went a combined 0-6. Alvarez did hit a long flyball to center in his 2nd at-bat but it was nowhere near home run distance. There was also a second game on Sunday - I only stayed for each players first at-bat, in which each player made outs. Moustakas did eventually get a pair of hits and an RBI in the 2nd game. The only notable play for either player in the field was leading off the first inning of game 2 Moustakas bobbled a grounder that was not ruled an error, had the ball been handled cleanly the runner may have been out.

The star of the day turned out to be a pitcher. Eduardo Paulino pitched 6+ strong innings for the Blue Rocks. The only hit he yielded during the first 5 frames was a solo homer to Jordy Mercer. Paulino did give up 2 more hits in the 7th before giving way to Ben Swaggerty who earned his 2nd save with 2/3 innings of work.

Alvarez politely declined my request for an autograph. I didn't have a card or a ball for him to sign so gave him one of those blank inserts that are pack fillers to sign. Pedro said "I am not allowed to sign those". I imagine he thought it was an index card. I usually ask out of town players to sign a ticket stub, but wasn't really thinking at the time and he was on his way back to the dugout. Between games several of the Blue Rocks players signed autos. I do not believe that Moustakus was among them. 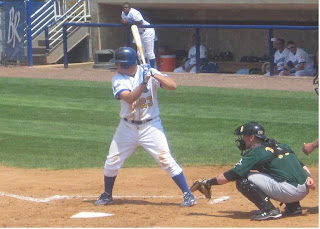 The minor league game was a fun day out and very affordable. Tickets are $10 for a box seat so close that it scares you. Parking is free. 24 oz imported beers (cans) were $8.50 I think. Other concessions were somewhat cheaper then at Citizen's Bank.

I hadn't been to Wilmington in about 10 years I am glad I went and hope to get back there later this year.
Posted by deal at 8:23 PM

Sounds like you had a nice time. I love minor league & independent league baseball because I can actually afford to sit close to the field.

All the time I lived in Philly I wanted to get down to Blue Rocks Stadium but never managed to. I did get to see the Trenton Thunder play a few times. Are they still around?

Trenton Thunder are still kicking - I think they are a Yankees affliate now - Paul from Paulsrandomstuff (comment above) goes to some of their games. some pretty big names have gone thru there on rehab assignments.

You should've let me know you were down in my neck of the woods, I would've met up with you for the game.