It has been reported that Bengie Molina has officially retired.

None of them were ever Phillies but I have always enjoyed following the Molina clan and hope to see Bengie Stick around baseball in some capacity. 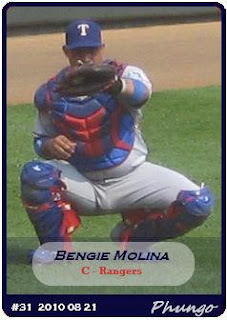 This is the Bengie Molina card I put together for the 2012 Phungo Set.  He is catching a warm up toss from then Ranger Cliff Lee.

I like this shot.   There are often pix of catchers in the crouch but they are always posed, or if in action from the side.  During warm ups it gives you the rare opportunity to see the catcher face front from relativley close range.  If you look in Molina's Mitt you see the baseball square in the pocket.

This pitcher seems a little up in the zone.  Which may have been ominous as Lee got lit up by the Baltimore Orioles that day.  O's rookie third baseman Josh Bell was the hero of the day as he hit his first and 2nd career Homers both of of Lee.

Bengie Molina retires the owner of 1 and half World Series Rings.  He won one with the 2002 Angels and was awarded one by the 2010 Giants who he played a half a season for, before being traded too the Texas Rangers squad that lost to the Giants.

Molina carreer spans 13 seasons, he retires with 144 career homers and a respectable .274 average.