Sort of - explain at the bottom of the post.  Here are a couple of teaser images.  Try and get up some more observations in the next 48 hrs or so. 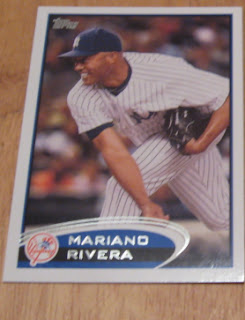 The first card of the year is a stinking Yankee, but at least it is a future HoF. 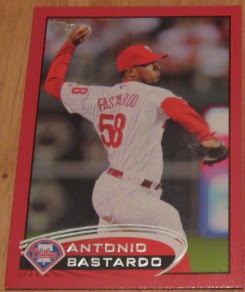 Left Handed SetUp Guy Antonio Bastardo.  One advantage to Photgraphing these cards is that in some scans I have seen the last name is unreadable on a scan - the black background hurts them.  The Red Parallells are a Target Exclusive I think and are related to... 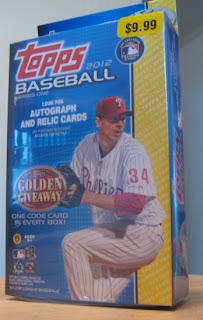 I have no idea what this configuration is called - I have seen them for a while, but never bought one.  I assumed they had packs in them.  But it is just a single brick of cards.

Until I hear differently I will refer to these as KindlePacks - although I am sure this is much bigger then an iPad Nook or Kindle.  Apparently 2012 Topps Series 1 Blasters do not carry relics or Autos. According to the KindlePack odds there is a 1 in million chance of getting one in these boxes.

The Target I went to in Malvern PA only had 2 configurations of Cards, these Kindle Packs and Blasters.  No Lose packs.

For me or anyone colecting base cards the KindlePack seems to be better then blaster.  The KindlePack has 72 cards vs 81 in the blaster - 80 + 1 Manupatch card.  No gauranteeed Patch Card in the KindlePack, but it costs only half as much for almost as many cards.

If you look at the top right of the KindlePack you see a price of $9.99, but when the shrinkwrap is removed a price of $10.49 is displayed.  not sure how Topps screwed that up, but I am glad to see somebody had the good sense to figure out that $9.99 sure looks a lot cheaper then $10.49.

Ok I wanted to get a couple of quick images up.  enjoy.  will try and post a more comprehensive review later.

Still waiting for Topps to go live in the 08094. (Hopefully today.)

I never bought one of the KindlePacks until 2011 Update, but I found them to be a better deal...especially when you consider how many more cards you get in two of those vs one blaster. Unless you're bent on getting a manupatch, these are the best bang for the buck.

I think they are called Hanger Packs, andI was also surprised at the "Brick" of cards. I bought one of these for the 2011 Updates...

They're hanger packs. I bet a few are hanging at a store near me. Maybe by the end of the week I can get to one.