Warning - Team Phungo will be piling on the 2012 Topps this week.

Apparently these are referred to as Hanger Packs, not Kindle Packs, or Nook Packs as I wanted to call them.  Just for the record at my local big box the packs were not on Hangers.  They were instead in a box on the bottom shelf in the card aisle.

Today we will look at the 3+ Phillies cards that I got in the pack. 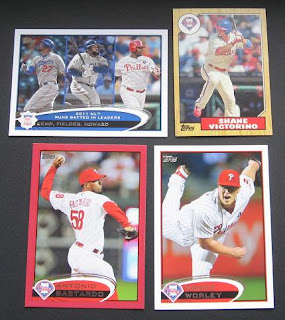 Good mix of cards here.  Getting two inserts of Phils more than makes up for getting only one base card.  One reason to pick up at Target rather than Walmart is that the retail specifc red insert works better for the Phils then the blue from Wal Mart.

I am with Night Owl regarding League Leaders cards.  The format doesn't work and now they have added the rather odd AL and NL active leaders cards to the mix.  And hey Topps lets put the LL cards back together rather than scattering them throughout the set.

There was one other noteworthy sort of Phillies card in the Hanger, that was the Jim Thome Checklist card which commemorates his 600th Home Run.  Thome is pictured as a Twin on the card, as that was the uni he was wearing the day of the Milestone homer.