Did 2012 Topps Sandbag Stars out of Series One?

While reading reviews and opinions associated with 2012 Topps I notices a handful of bloggers commenting that their packs and breaks lacked star power. 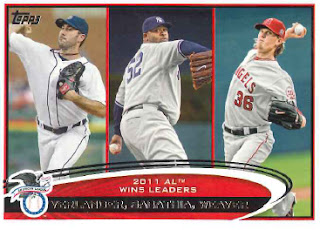 Indeed 2 of the 3 players on the AL Wins League Leaders Card were not honored with Series 1 base cards.

This poses the following Question:

Did Topps Sandbag Series One in 2012 in an attempt to Backload the Stars into Series 2?

This is an odd assumption.  I have thought that Series 1 was a little more star laden in the past few years, but maybe I am just jaded by the time Series 2 hits the streets.


To look into whether Series 1 is Star Deffered I had to find a way to measure Stardom.  Depending on what the researcher values this can be measured a number of ways.  Baseball-Reference has an incredible warehouse of information easily accesible.  In the end I decided to use something that is pretty unscientific, yet I believe highly fitting -  The MVP Voting.  The MVP voting is definitely a subjective excercise - but so is Superstardom.  Chances are unless your a fantasy geek you first learned about a star player from outside your club via word of mouth, not analyzing their OPS in the Internation League.

Between the 2 leagues there were 72 Players who recieved either an MVP or Cy Young vote for the 2011 season.  Of those 72, 10 were duplicated pitchers who also were on MVP Ballots (ie. Justin Verlander).  I removed 4 players that were either FAs or we expected to move teams during the off-season (Pujols. Fielder, Reyes, Beltran) although in the end 2 of them were sort of issued cards :)


That left us with 58 "Stars" In theory half of these players (29) should have been issued Cards in Series 1 while the other 29 would get into Series 2.  Let see how they fared
In each column pair, the player name is preceded by their series 1 card number.  If no number is given that indicates that the player was not in 2012 Series 1.  Pardon the weird psuedo-alphabetical order.

From the chart we see that 33 of the 58 stars received S1 cards.  that is 4 more than half, or 57% to be more specific.  Even if you add Fielder and Beltran as misses, Topps was above the 50% threshold.

This doesn't necessary mean 2012 Topps contains as many stars as years past - it only means that cards were issued for over half of the "stars" in our pool.  There is typically some overlap of some cards between S1 and S2 so that may account for the extra 7%.  In years past this number may have been greater - if I get the energy we will look at 2011 Topps to compare and cotrast.

There may be some other factors at play - I am only investigating Stars, there may just be more unkown or little known players this year - this adds to the perception of less stars.  The 2011 release calendar may have hampered getting some rookies into 2011 Series 3 and Topps added them to the inaugural 2012 set.

I also think that there are less know stars in the post-steroid era.  Stars stick around less time and age out sooner.  There is more new talent and we are less likely to know who they are.  Also there is the agism factor - the older I get, the harder these things are to track.