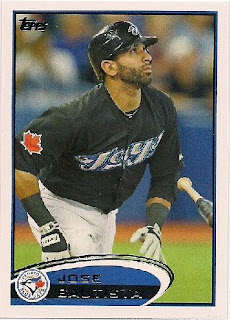 2012 Topps #100 Jose Bautista
As an adult I now realize Hero is a term that is more appropriate when applied to my local EMT making snap decisions under difficult circumstances then a Millionaire Ballplayer throwing and hitting a little white ball.  In that way I suppose we should use the term Glamor Number, but Hero Number is what I grew up with and I am sticking to it.


This line of thinking let me down a strange path ...Lets look at this years Heroes.


I quickly noted that the latter 2 in the group have had various issues with alcohol and substance abuse.

Should Hamilton and Cabrera get Hero Numbers?

I wanted to find out how much this is noted by fans of the players.

Regarding Miguel Cabrera
Too Many Verlanders:
When he got in trouble again for drinking and driving, I definitely got very frustrated, as I get every time some knuckleheaded gazillionaire athlete, who could easily afford 10 different limo drivers every night, pulls that crap.  He's more frustrating than most for me because he plays for a team I root for, and more importantly he obviously has so much more talent than almost every Major Leaguer that I would hate to see him throw that away.


Then TVL went on to add an interesting comment
....while what Cabrera did (multiple times) was very reprehensible, and probably should have resulted in more severe punishment either by the local authorities, MLB or both, I find people criticizing Cabrera and fawning over Josh Hamilton frustratingly hypocritical.

When I asked the questions Too Many Verlanders was unaware that one of the other Hero Number Mates was Hamiton.


Regarding Hamilton
Play at the Plate


We would all hope the people our kids look up to would be solid citizens who don’t make mistakes.  In reality, many athletes aren’t good role models.  It could be for any variety of on or off field behavior, but it’s true nonetheless.  The thing I like about Josh Hamilton is that he stood up and faced the media, and thus his fans, when he could have just tried to ignore or cover up his recent relapse.  All of us make mistakes, but most of us don’t face the scrutiny someone like Hamilton faces.


interesting comments all.   And I am glad I asked the question.

Granted at the time of publication Topps didn't know that Hamilton would tarnish his refurbished image.  Regardless It's obvious that Topps didn't really note off the field activities when awarding the numbers.


Would you consider it a gimmick if Topps awarded the Hero Numbers to star players who are also solid citizens???

Check the Right Hand Side - Topps sort of owns the concept of Hero Numbers so why not capitalize on it.

Award Numbers 100 200 and 300 to star players who are also part of the community and generally on the good behavior side.

Hero Numbers could be a topic of instant conversation every year and not just another lame gimmick.


Thanks also to Too Many Verlanders and Play at the Plate for some insights into two of the games biggest stars.
Posted by deal at 9:02 PM