Today we look at Foil.  Unlike most folks, I don't have a huge problem with foil as a design element.  Sometimes it looks ncie, often it is overused.  It can also be confusting - Remember 2008s Gold and Silver Foil which appeared so similar.

The biggest problem I see with Foil is This 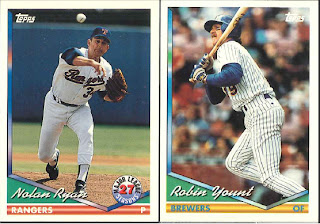 1994 is the last time that Topps has issued a base set without foil.  Back then both Nolan Ryan and Robin Yount were in the set.  Now they are in the Hall of Fame.

To give you an idea of how long ago that was, Yount's Brewers were still in the AL.

The last time Topps didn't foil their base set they were still issuing cards of Nolan Ryan, who they had issued cards of back in the 1960s.  (Ryan retired prior to the 1994 season)

When the last non-foil set was issued in 1994 The D-Backs and Devil Rays were yet to play a game.  Derek Jeter had won a grand total of zero world series and the Red Sox were Still Cursed.

Topps has issued 18 consecutive years of base sets with Foil - and in 1994 they as well as well as a few years prior foiled cards were issued as parallels.

In short after 2 decades Foil has become tired.  Sometimes Opening Day looks refreshing or even better because of the lack of foiil.

The Foling of 2012 Topps isn't even that bad - it doesn't scan well, but I don't think that is something that is really complaint worthy.  The scanning issues against Topps because it makes it harrd to discuss the cards, but in hand the player names are readable.

But falling back on foil as a design element year after year is lazy cardmaking.