Uncle John's Band who publishes the entertaining Cards that Never Were blog was the only person to submit an entry for our Phungo Challenge on a Pat Burrell card roughly a month ago. 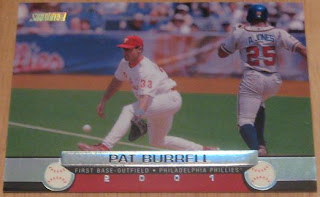 2001 Topps Stadium Club Pat Burrell
For this card UJB went with June 19th 2000.  I think he got the right series but I am leaning towards a game that was played the previous day Sunday 6/18.
The series is pretty easy to drill down,  Burrell's rookie season is the only one he played at first base.  6/16-6/19 was the only Phils home series hosting the Braves that featured a Burrell appearance.  The Guest Star on the card is obviously Andruw Jones - pretty strong guest appearance there.  Surprisingly not many of Jones' ABs during those 4 games match up with the evidence in this Photo.
I pretty much brought it down to a few plate appearances in the games on June 18th and June 19th.  In the end, I am pretty sure this is a day game and that is why I went with 6/18.  It is true that there is significant daylight early in a night game in June, but the AB for Jones would not have taken place until at least the 3rd inning on 6/19 which would have been likely after 8p.  I can't see there being that much light at that time of day.  The other half of that theory is that I think Topps and their photographers generally use day games, because of the better lighting.
I also worked under the theory that Jones could have been safe on the play.  And indeed on Sunday June 18th in the fourth inning Jones did have an infield single.  There were other possible outcomes - obviously the ground out, which happened on 6/19 and back end of a fielders choice which may have happened on 6/19.

There is a chance that Uncle John's Band is correct and he hti the correct series so UJB you are the winner of the first Phungo Challenge of 2012!