Today we are noting Hank Aaron's 82nd Birthday by delving into our 1967 Topps/2016 Heritage series.

This year is not the first time that Topps has elected to look back at the 1967 design. I believe the 1974 Hank Aaron Special Subset was Topps original Selfie. 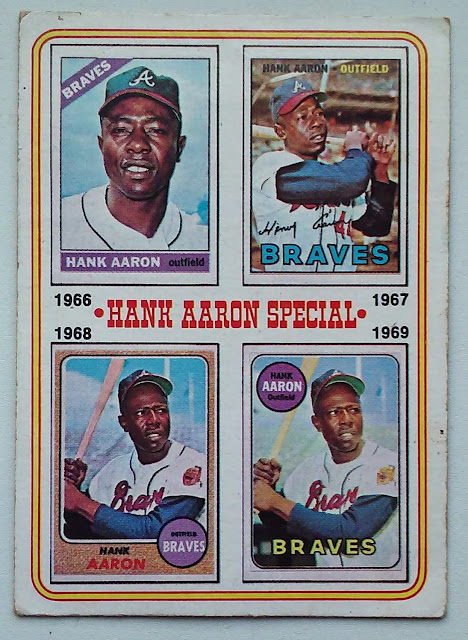 I do like the idea of re-running Aaron's cards at this juncture of his career. Although it is a disappointment to clearly see Topps reuse of the same image for both the 1968 and 1969 cards. This is an total failure when creating a card for a star of Hank Aaron's stature. 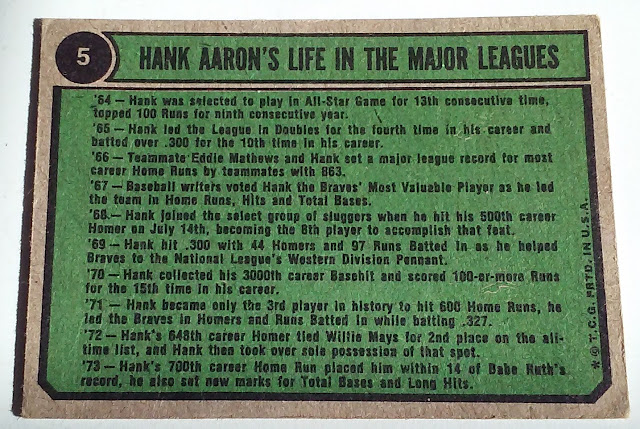 Each of the four cards that make up the Hank Aaron Special Subset has a special back. Cards #4 is the second half of a timeline of Hank Aaron's milestones that started on Card #4

The events on #5 run from 1964-1973. Nice summary of the 2nd half of Aaron's career here, 1971 is an interesting milestone here. Hammerin' Hank was the 3rd player to reach the 600 Homer plateau, now that club has eight players including Sammy Sosa and an active Alex Rodriguez with Albert Pujols knocking on the door.

I wasn't on the ball or I would have posted this card as part of our 2015 Heritage/1966 Topps retrospective. I am lazy so we will link to it.