The Philly Show returns to Valley Forge this weekend. 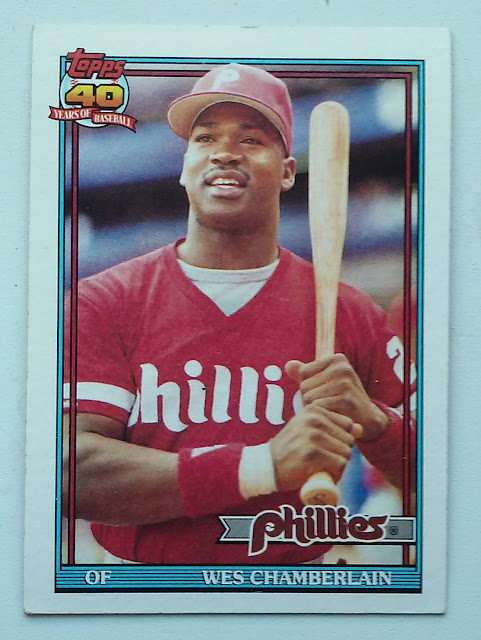 For autograph hunters this edition of the show is stronger for football fans than baseball. Saturday is for the Grid Iron Heroes including Jeremiah Trotter and Brian Dawkins with the Big name being Hall of Famer Deion Sanders.
Sunday features a couple of reps from the Phillies 1993 NL Pennant Winners including Kevin Stocker, Danny Jackson, Tommy Greene, Jim Eisenreich and Wes Chamberlain (above)


Chamberlain was a rookie when this 1991T card was released thus the profile shot. The bat knob appears to specify “48”, while his Jersey sleeve looks like either “2” or a number in the 20s. As a major leaguer Chamberlain’s Phillies numbers were 31 and 44. 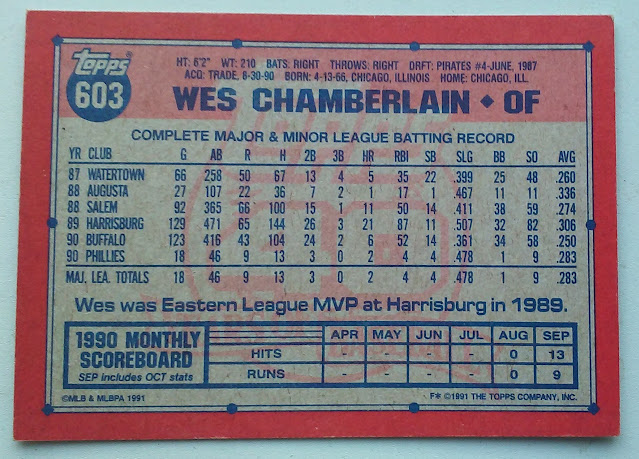 Just wanted to post the back of this early Wes Chamberlain card for the text, a one line statement that notes Chamberlain was the Eastern League MVP in 1989.

This piqued my interest a bit more than usual because Jim Salisbury just published an article on the Most recent EL MVP Brock Stassi, who happens to be in the Phillies current spring camp. Stassi had a great year but at age 26 he is a bit advanced in age to still be considered a prospect. Couple that with the fact that he is a Left Handed hitting first baseman in the Phillies Org and it is pretty easy to see that his future with the club is pretty cloudy.

Regardless Brock Stassi is a 33rd round draft pick on a 40 man roster with a possible chance to make a big league roster. That is overcoming some long odds.

Philly Show Discount
This likely doesn't mean much if your going to blow a couple of hundred bucks at the show, but if you can find a copy of a Friday or Sunday Philly Inquirer they often have a dollar off coupon.