Tonight we return to our 2016 Heritage PrepWork and take a look at the Rookie Stars suberset from the original 1967 Topps Set. 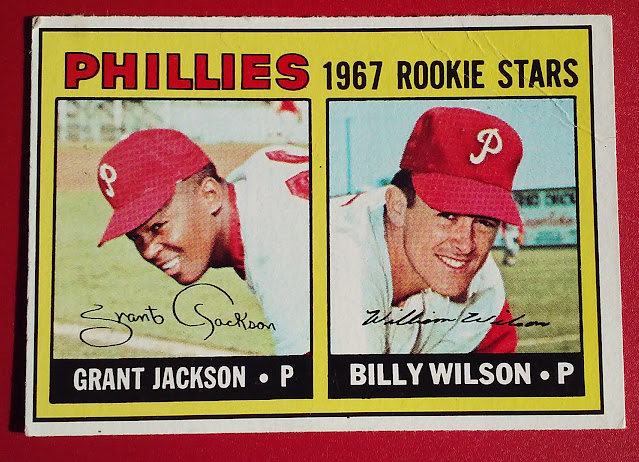 
The word Rookie applies in Card Lingo to Billy Wilson here as this appears to be his first Topps appearance. However this is NOT Grant Jackson's debut, he appeared on 1966T #591 card with Dodgers infielder Bart Shirley.

Grant Jackson debuted with the Phillies in 1965 and represented the club in the 1969 All-Star game, sadly Jackson did not see any game action in what was his only invitation to the mid-summer classic. In 1970 The Phillies traded him to the Orioles as part of a multi-player deal that yielded Roger Freed. Grant Jackson would go on to see playoff action with both the O’s and Yankees and eventually won a ring with the 1979 Pirates.

Billy Wilson made it to the big leagues in 1969 and stuck with the Phillies (his only major league club) through 1973, he pitched in 179 games all relief appearances


1967 Topps Rookie Stars
As mentioned in our opening posting of the 1967 Topps retrospective the set does not have many design elements. This leaves few opportunities to tie the dual panel Rookie Stars to the base cards.

Topps kept the font of the team name, but changed the color. I do like the contrast of the Phillies red on a yellow background. The Yellow is a nice look for Rookie Stars, but really bears no connection to base. The player name appears to echo 1966T more than 1967, Although they did keep the dot followed by the player position. Facsimile signatures (returning after a seven year hiatus) appear on both card types. 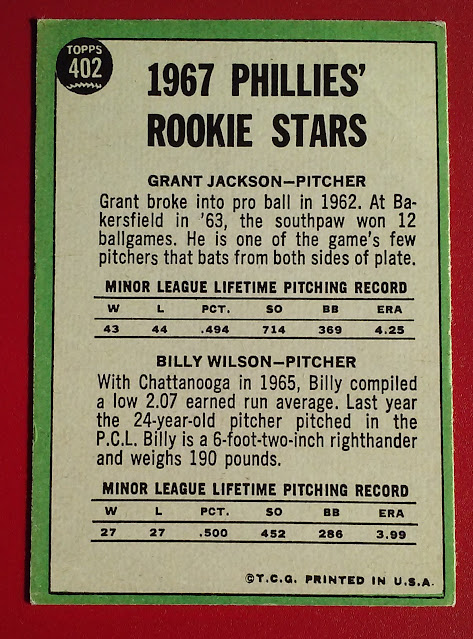 The card backs have a short paragraph followed by career minor stats. The last line of Billy Wilson's bio is pretty sad. The author could come up with nothing more than the league Wilson played in and his Height Weight demographics - That little info likely tells you that a player is doomed to a mediocre playing career.

There are two variations of the Jackson/Wilson card. This is the more common of the two, there rarer version does not have a complete line drawn across the bottom of Billy Wilson's stat line.