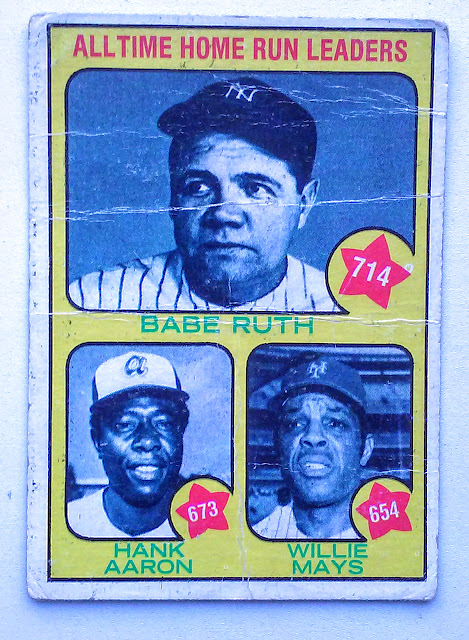 Love how Topps had the foresight to realize that this card was in it's waning moment. The following year Aaron would be sitting at 713 at press time, and a month into the 1975 season Hammerin Hank would be atop the pyramid.

Willie Mays on the edge of retirement and retuning to New York is just icing on the baseball card cake. 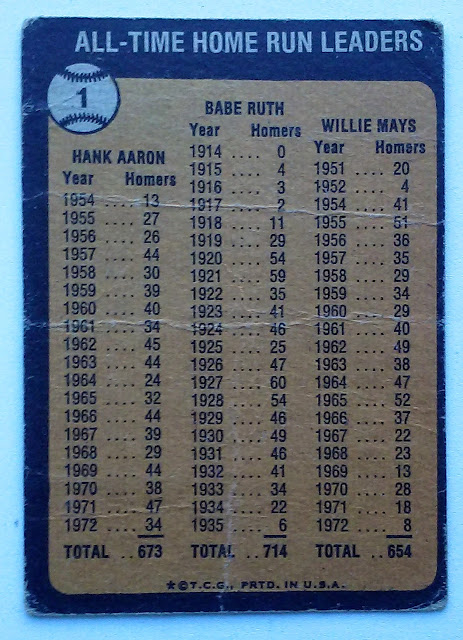 I kind of like what Topps did here, listing each of the three leaders with their annual Home Run totals. I still haven't gotten any 2016 Topps but I fear one of the things I will mention when I finally get my hands on some of this years cards is the lack of imagination in the new set. Of course back in 1973 Topps was significantly younger, I suppose the chance of producing pleasant surprises were higher.

#1 Club
This beauty has to be on the top end of the #1 club and it easily beats out the 2015 Derek Jeter card. 1973 is the first of four consecutive years in which Hank Aaron is featured on the #1 card, he also appeared on 1963T #1 as the fifth man in a quintet of Batting average leaders. Willie Mays previously appeared as the sole occupant on the 1966T #1 card. 1973 is Babe Ruth's only appearance in the top spot.