Eddie Murray played for five teams during his career but to me he will always be an Oriole and one of my favorites. Tonight we mark the Hall of Famer's 60th Birthday on Wednesday with a look at his 1979T card. 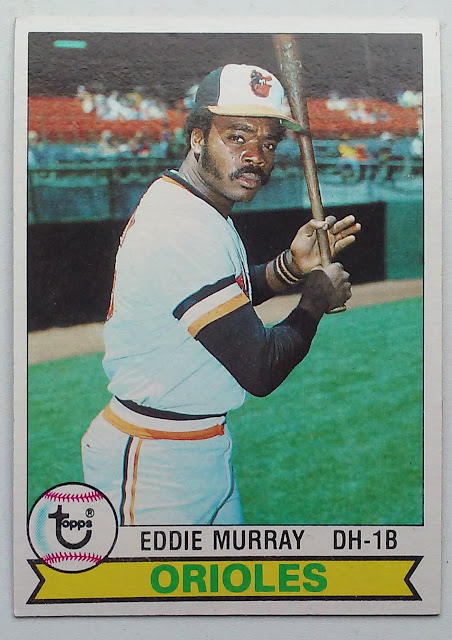 This is 2nd year card of Eddie Murray which followed his first All-Star Season in 1978.  Despite the fact that he only DH'd in one game that is still the first position listed on Murray's 1979 card. Of course this is balanced out on the last couple of Eddie Murray's Topps cards he is listed at First Base despite being primarily a DH.

During the 1978 season the slugger actually played more games at 3rd base (3) than that single game at DH - but he has never been listed on any card as a Third Baseman. Murray played a grand total of 6 games at 3rd, His only 3 as a starter were during that 1978 season. 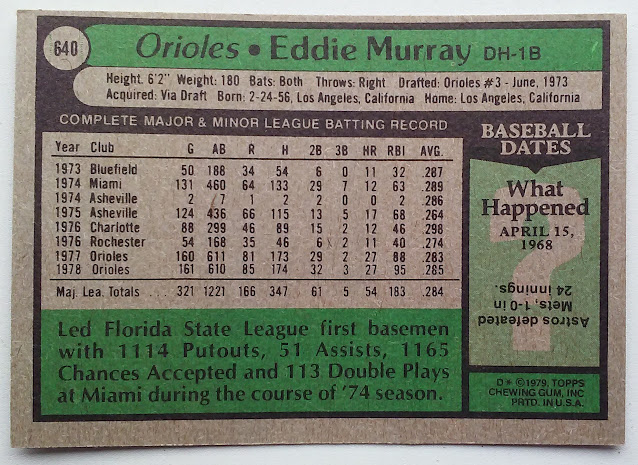 Despite being listed as a DH and All-Star First Baseman and the 1977 AL Rookie of the Year the text blurb on back of Eddie Murray's card drones on about a bunch of defensive stats accrued in the single-A Florida State League.

This is not uncommon for 1979 Topps, Many of the cards for the sets younger players reference either minor league, college or High School accomplishments. For Murray I think neglecting the RoY award is a pretty glaring omission.

Baseball Dates
The B-side flair for 1979T are trivia Qs related to random dates in Baseball History. The Eddie Murray Card references a Mets Astros game from April 15 1968. The 24 inning marathon was finally won 1-0 by the Astros when Bob Aspomonte reached on a Bases Loaded Error by shortstop Al Weis. Alsponte went 0 for 9 in the game.

Lots of other fun facts from the box. The Starting pitchers were Tom Seaver and Don Wilson but Astros Reliever Jim Ray may have been the star of the game. He recorded 11 Strikeouts despite not entering the game until the 14th inning. The Mets used seven relievers in the game, a dozen different players occupied the 9 spot in the batting orders for New York.

Bob Aspomonte did not have the worst 0-Fer in the game - Mets Tommie Agee and Ron Swoboda each went 0 for 10. Each team batted .139 for the game (11/79) and they were a  collective 1-23 with runners in Scoring Position.

Ed Kranepool came close to racking up a games worth of Putouts with 25 at first base for the Mets. His counterpart Rusty Staub logged 23.

Tom Seaver was the only future Hall of Famer who played in the game. Big names involved in the game other than those mentioned above include Cleon Jones, Bud Harrelson, Jimmy Wynn, Doug Rader, and Former Phillies GM Lee Thomas. The Mets manager was Gil Hodges.