It was raining today so I didn't bother checking in at my local big box to see if they have any 2016 Topps.

My disappointment with several aspects of this years offering has not stopped me from scouring online sources to get a glimpse of some of the new cards. 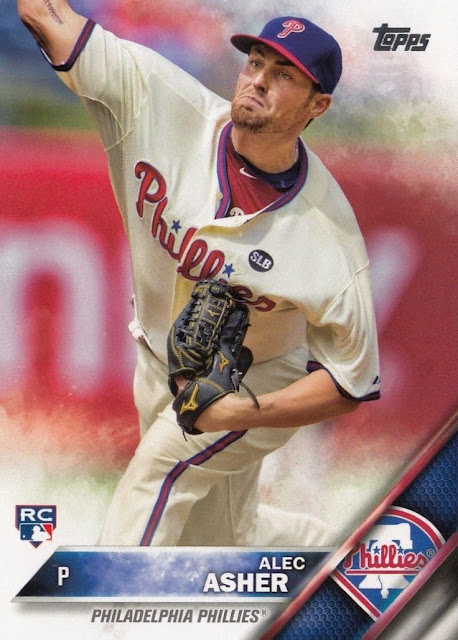 I have been babbling for the last month that the photos in 2016 Topps are too tight. This card is the exception. A shot from further away or less clear wouldn't display the evidence of the surgery and would just be another pitchers card.

Getty Got It
I went to one of my recent obsessions and checked Getty Images to see what we could find out about this picture. My research has pointed me towards a photo taken by Mitchell Leff during a game on August 30 2015.

The game was Alec Asher's Major League Debut and according to the information associated with the photo on Getty's website the picture was taken in the first inning. This means on this 2016 Topps card we have a shot of Alec Asher throwing one of his first pitchers as a major leaguer.

I won't even bother nitpicking about this not being one of those Major League Debut cards with date at the bottom of the photo.

Unfortunately my love of this card doesn't change the fact that Alec Asher took the Loss in his Debut. It was the seven starts the rookie had for the Phillies in 2015, only one of which went well - most were poor as Asher went 0-6 with a 9.31 ERA. Hopefully the 24 year old pitcher has a better go around when he returns to the big leagues.

Nice job tracking down which game the card photo is from