The Phillies recently posted their 2016 Wall of Fame ballot, Right at the top of the list is Slugger Jim Thome.

We are going to use this opportunity to extend our tour of #1 cards to include Topps Heritage. 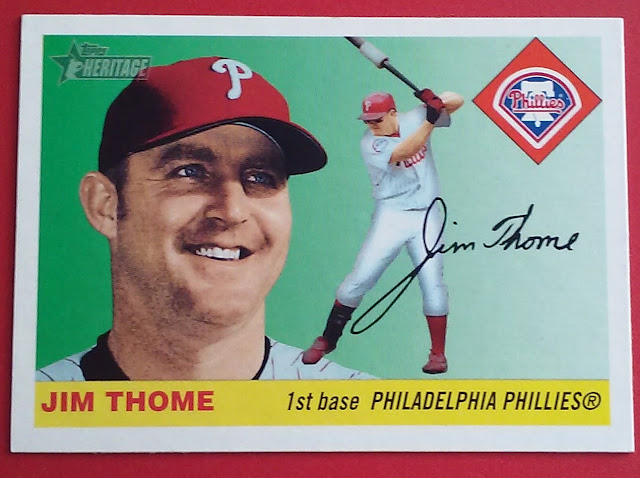 In 2004 Topps put Jim Thome on card #1 in both flagship AND their heritage set. At the time Thome was coming off of his first season with the Phillies, a year in which he had led the NL in Home Runs with 47.  Not sure if it was a factor getting Thome on the #1 card but there was also a lot of buzz around Phillies as the team opened Citizen's Bank Ballpark in 2004 as well.

Near as I can tell the #1 Heritage Thome Card has no connection with the subject of the original 1955T card which was Dusty Rhodes. 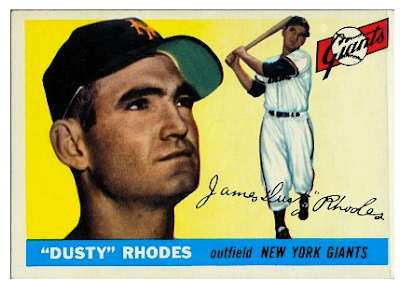 Rhodes earned the top spot by hitting a pair of Home Runs and collecting 7 RBI while helping the New York Giants to win the World Series over the Cleveland Indians. Amazingly Dusty Rhodes didn't start a game in the 1954 Series and only played in 3 games, with 7 total plate appearances. But he made them count - one of the Homers was a Walk off in Game one. In game 2 he had a game tying hit in the 5th inning followed by a lead extending Homer later in the game. Those three hits all came off of future Hall of Famers (Bob Lemon G1, Early Wynn G2) 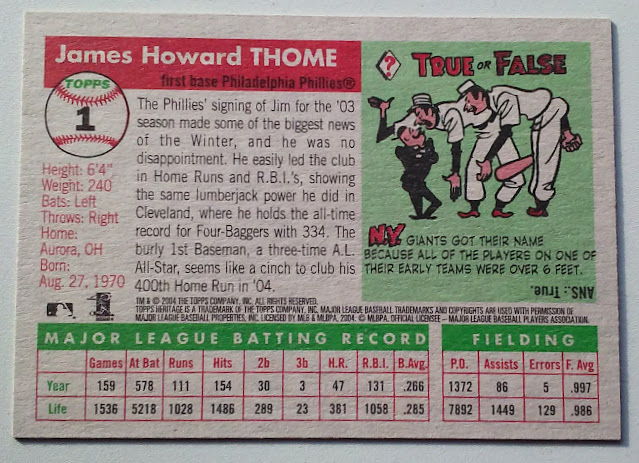 Returning to Jim Thome we post the back of his card and you can clearly see the #1 in the top left. We also have a minor connection to the Dusty Rhodes card - the cartoon/trivia Q on the Thome card does happen to reference Dusty's team, the Giants. 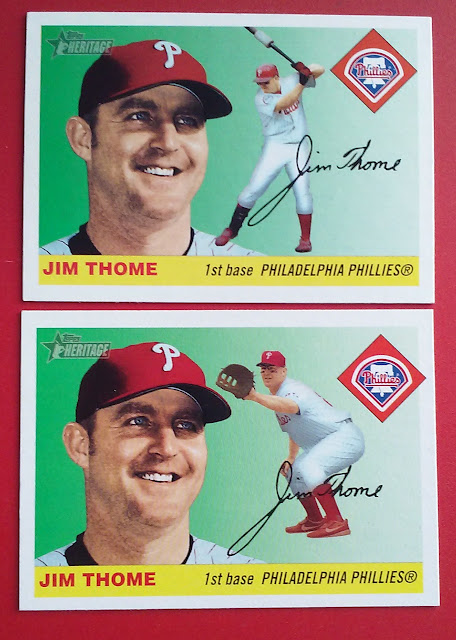 If you have been paying attention you will have noticed that the card we are discussing is a short print. The SP is the top card above with Thome shown holding the bat. The common #1 card is the latter of the pair with and action shot of Thome holding the bag at first. The Facsimile auto is moved a tad to better match the inset shot, other than that the Base and SP are identical. 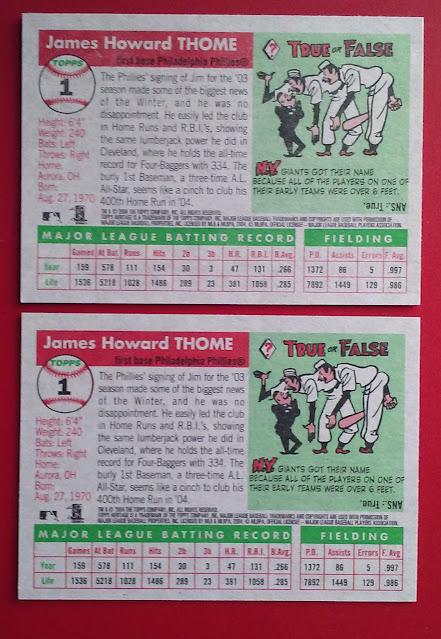 And one final flip just to demonstrate the two cards have matching backs.  This is 2004 and Topps is in the pre-serial code era, that small print above the stats doesn't clue us in to which card is a base and which is a shorty. I pulled the two cards within a string of 3 packs or I may noticed myself.

I'm a Cubs fan but Thome is definitely in my most admired baseball players group as well as being a great player.

Worth of a Heritage Jim Thome #1 Topps