Today our 2016 Heritage Preview takes a look at the 1967 Topps League Leader cards. 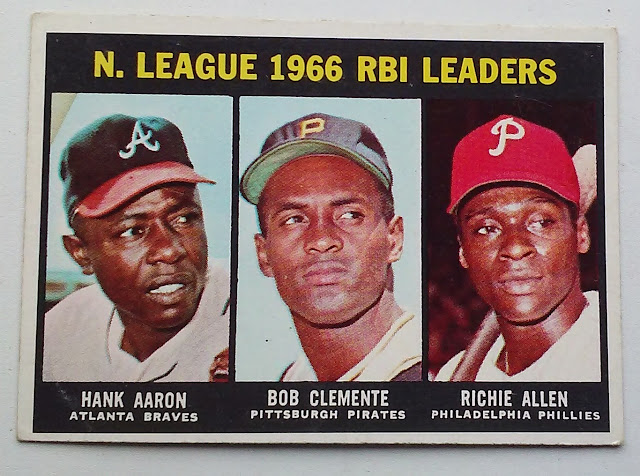 In a better world this card would have Three Hall of Famers on it. Unfortunately we live in the cruel universe where Dick (nee Richie) Allen resides on the edges of the Hall.

Regardless, I LOVE THIS CARD!!! What Phillies fan would not?

The 1967T LL cards are pretty vanilla but strong. This format is very similar to the the 1966T LL cards. If I had a quibble with the design it would would be the use N. LEAGUE rather than NL.

The 2016 Heritage version of this card will feature Nelson Arenado, Paul Goldschmidt, and Anthony Rizzo. I am pretty comfortable stating the panel on the original will be remembered a lot longer than the upcoming Heritage LL card. 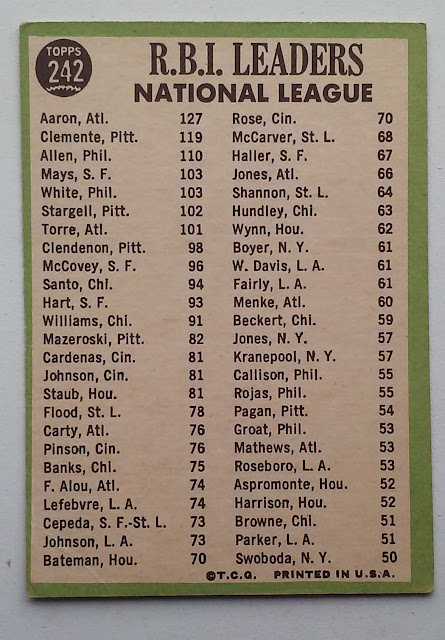 Solid listing of players on the back of the card. Five of the seven players over the 100 RBI threshold are in the Hall, the other two played for the Phillies :(

There are a dozen league leader cards in 1967 Topps, six cards for each league: ERA, Pitching (wins), and Strikeouts for pitchers; Batting (Average), RBI, and Home Runs for Hitters. In addition to appearing on the RBI card, Dick Allen is also the center panel on the HR card between Aaron and Willie Mays (WOW!). Jim Bunning occupies the 2-spot on the NL Strikeouts Leaders card.

I am a little curious if Topps will do anything with NL Wins LL card, Bob Gibson and Gaylord Perry tied for third place in Ws with 21 each in 1966 so they had to split the final spot on the #236 card.

There Will not be any Phillies on the 6 NL Leader cards in 2016 Heritage.

"I am pretty comfortable stating the panel on the original will be remembered a lot longer than the upcoming Heritage LL card. "


As a big fan of the 1967 set, after looking forward to 2016 (and the 1967 Heritage set) for years, last year I came to the realization that because of the reason you stated above (and not just about the LL cards), I have no desire to buy any 2016 Heritage cards.