For this years Heritage release Topps will be revisiting their 1967 release. Up until  recently I found this set bland. Upon further review I think of it as a minimalist design that helps highlight the player photo.


Bear with me as I open the 2016 Heritage/1967 Topps discussion by posting the #395 Chris Short card which we have featured at length in our 1964 Phillies Retrospective. 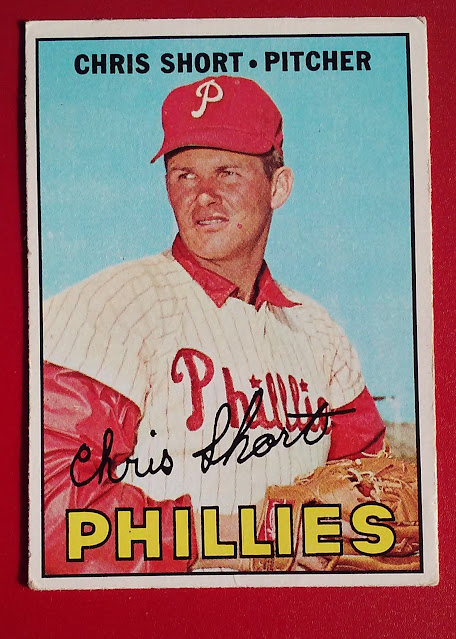 Everything comes together, A Semi-Star player, The bright red windbreaker, and the clear blue sky. The whole image says spring training baseball. The whole card is discussed beautifully over at the 1967 Topps Blog which I am sure I will cite frequently throughout this years discussion of Heritage.

The layout of 1967T is a solid foundation for a great card. The Bold but non-intrusive team name is the anchor for the design. Above the name we have the facsimile signature, which is quite clear on the Chris Short card, Player and position at that top with the photo extending all the way to the borders. This make 1967 Topps the fullest photo since 1957 Topps which similarly ran photos to the border with player name, team and other info overlaying the photo. 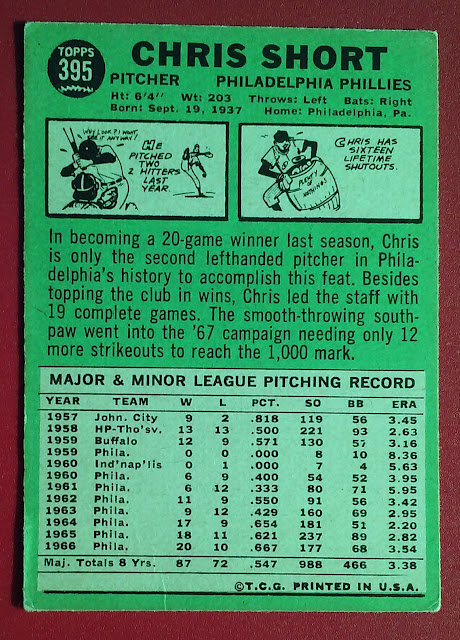 The Lime Green back side was a bit jarring when I first saw it as a kid. However, as I get older I appreciate the color more. It forms a good contrast to the text portion of the card. Some of the middle 70s dark greens are tough to read.
I look forward to seeing the 2 panel cartoons on 2016 Heritage. Check out the 2nd -toon mentions that Short had 16 shutouts, and this was only half way through his career. This artwork will NOT be on any Heritage card - Bartolo Colon is the active career leader in Shutouts at 13.

Another nice feature is full minor and major league stats. Although if one runs a comparison with 1966 Topps, we see that the profile format of the b-sides forces a couple of columns to be dropped. For pitcher cards these fields are league, Games and IP. For position players league, games and runs scored were eliminated. 1967 is the first Topps release to run the backs in profile rather than landscape format.

1967 Topps came in at 609 cards which was the companies largest release at the time. 2016 Heritage will come in at a mere 425 cards, which will minimize the opportunities for Topps create number matches including both key rookies: #569 Rod Carew, #581 Tom Seaver and Chris Short's banishment partner #570 Maury Wills.

Over the coming weeks we plan on hitting a few topics in 2016 Heritage/1967 Topps, that statement comes with the regular Phungo disclaimer attached to our serialized features: We reserve the right to blow off the rest of the series at any time. If we stick with it some of the topics are indexed below.

I too have always enjoyed this set for it's simplicity and emphasis on photography; tons of blue sky on these cards! Like you said, they just scream spring training baseball and the optimism/anticipation that brings.

If there is a high number set (preferably in packs like last year), then 2016 Heritage could easily equal or surpass 609 cards.

I love this set for the reasons you mentioned and that it's one of the first I remember getting as a kid. I still have a small number of them in not very good condition, including for some reason three (I think) Whitey Ford's (his last).