No time to Talk just wanted to mention I was at a big box store yesterday and picked up some 2010 Topps Football Cards. The cards come 12 to a pack and went for $2.10 w/ PA Sales Tax included.

First Football Card of the Year 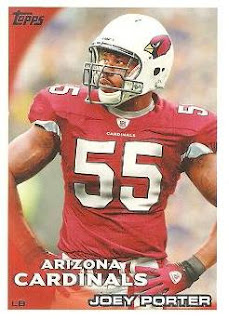 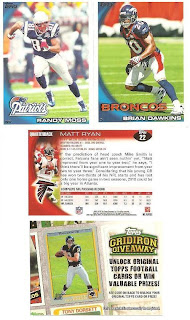 I liked pretty much every card I got in the pack - click to enlarge this one and you will get a peak at a B-side of Matt Ryan. The Gridiron Giveaway is the football version of Baseball's Million Card Giveaway. 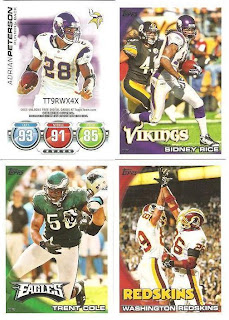 Got two Vikings - sort of. The first is a Peterson Attax card.

The Last 3 cards in the pack were all Rookie Cards. The Last Card is of Jahvid Best, he was the highest pick among the 3 cards featured here (#30 overall). On the back of the card it specifies:

Sounds Like some parallel insanity or rookie inserts galore for The newest edition of Topps Football.

I will have a more formal review later - I am just posting these for images right now. Perhaps I will have a more thorough post at aPTBNL if nobody else has posted one by this evening.
Posted by deal at 11:14 AM

Topps Football is live? Huh. I did not know that.

I want these... or at least, the million card giveaway thingies... unfortunately, no retail store within 1000 miles of me carries football.

Hopefully, my LCS will get them soon.