The Japanese movie that team Phungo took in this week was "Rashomon" which was directed by Akiri Kurosawa (note: It has a Samurai)
A few years ago the Bryn Mawr Film Institute (BMFI) was created to revive a run down theater in the community. BMFI generally runs contemporary indie, art films, and foreign films - IFC type stuff. They supplement these movies with Classic Older Films or Series during the week. This month they are doing a retrospective of Kurosawa.
I had a 100 level film class in school and for a while had a significant interest in film as a leisure hobby. I had always wanted to see a Kurosawa film based on the opinions of my friends, and the directors influence and notoriety.
Basically "Rashomon" tells the story of the rape of a young woman and the murder of her husband - a notorious bandit is involved in the crime, but exactly what happened is unknown. What makes "Rashomon" significant is that the 1950 film is the first to tell the same story from several different Points of View.
This brings us to "Jackie Brown". You may remember the critical "heist" scene at the end of the movie is shown from the vantage point of 3 different characters. There are a few other examples of films doing this, but "Jackie Brown" is probably the most accessible for today's film aficionados.
I appreciate that "Rashomon" was a groundbreaking film for how it's narrative was arranged, and also noted some film techniques that I was surprised to see in a 1950 film, but overall I leff the film and thought it was a good/above average but not great film.

If your a fan of the Tarantino films or perhaps Christopher Nolan (Memento), I would recommend the movie strictly to see an early example of a movie told in this out of sequence fashion. I also think it is a good movie to introduce one to Japanese cinema - it is a film of significance without much dialogue so there not a lot of reading involved.
It is hard to place a film into it's era knowing everything that came after it. Someone who Saw "Star Wars" when it debuted is certainly going to have a different opinion of someone seeing it for the first time. now. The story will always remain good. The the visual and sound effects that made the movie which remain incredible can not help but be diminished a bit from being recycled for a generation.

For a detailed review of "Rashomon" and the films place in history check out this very interesting review/essay by Roger Ebert. 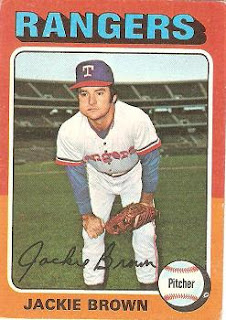 Phungo Challenge
As far as the Challenge goes, Dayf was headed down the right path, but took one step to far. I have been wanting to post a Jackie Brown baseball card and reference the 1997 Tarantino film of the same name for a while.
Community Gum stopped at Jackie Brown and looked up the Rashomon connection.

Community Gum also adds himself to the list of Phungo Challenge Winners.

One final note - Jackie Brown the baseball player happens to be the uncle of Daren Brown who was just named manager of the Seattle Mariners.
Posted by deal at 7:55 PM

Rashomon was one of the films they showed the Cinema majors in the first class.

Film school makes a kid jaded towards everything, but I remember loving it at the time. Maybe now that it's a decade later, I wouldn't dig it as much.