Sometimes you go to the ballpark expecting to see a favorite Ace dominate and instead you end up seeing a Rookie Prospect have the best day of his young career.

That was the case in Saturday's Game when Orioles Rookie third baseman Josh Bell clubbed two homers off of Rangers Ace and Former Phil Cliff Lee. The Homers were the first two for Bell as a Major Leaguer. Bell Collected 5 RBIs and scored 3 runs for the day as the Orioles won 8-6.

Bell was not the only Oriole to go deep yesterday as Ty Wigginton and Luke Scott also Homered off Lee who gave up a career high 4 dingers including 3 in the 4th inning.

Brad Bergesen got the win for the Orioles - he had given up 3 runs over the first 6 innings, before giving up a 2 run shot to Josh Hamilton in the 7th. The O's may have found a spot for Koji Uehara as the Japanese Righty notched his first career save.

According to an ESPN report I heard that Josh Bell was the first Oriole to hit 2 Homers out of the 9 spot in the order since the 1920s. Bell has been pretty mediocre for the Orioles since his call up, glad to see him have a big day.

Sorry O's Fans, I just got carried away with finding Rangers to Photo and didn't get any decent pics of Orioles. I did get one interesting O's related photo. 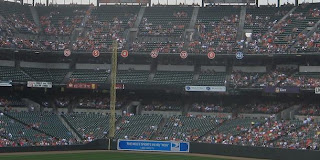 I am not sure how long these have been up on the Upper Deck facade. The O's have always had the numbers outside the stadium. I believe the numbers are posted in Chronological order. Jackie Robinson's is in Blue on the far Right. next to the O's most recent retired #8 of Cal Ripken. 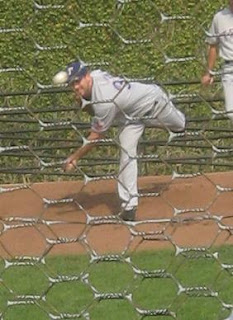 This is how Lee looks warming up, prior to getting lit up like a Christmas Tree. Bullpen access at Camden Yards is pretty good, It is recommended that you check it out if you can get to the Ballpark early. 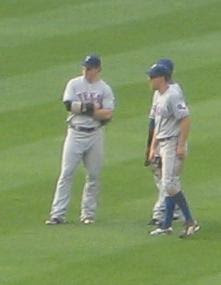 That is Josh Hamilton with David Murphy to the right screening Julio Borbon.
Posted by deal at 10:41 AM

Great report! You are correct - the O's just added the upper deck facade retired numbers this year and they are in chronological order, with the exception of Jackie Robinson.

One minor correction: the winning pitcher was Brad Bergesen, not Brian.

I'm jealous that you saw Bell's first two homers. At least I got to see his first RBIs a few weeks back!

Got Brad's name corrected. I was with my friend Brian - maybe that is what confused me.

I should also mention it also appeared as if Bell missed a 3rd homer by only a few feet.