Great night to be at the Ballpark - The Confluence of several events made for a great evening.
1) Going into the game the Phillies and Giants were both playoff contenders locked in a virtual tie for the wild card spot in the NL playoff race.
2) Pat Burrell also returned to Philadelphia, playing left field for the Giants.
3) The game was the 2nd home start for recent acquisition Roy Oswalt.
4) There was one final bit of spice that added to the electricity of the evening - Phils All-Star 2nd Basemen Chase Utley returned to the lineup after several weeks on the DL.

I must also add that it was a rare perfect night for baseball, in what has been an extremely hot and steamy summer here in the Northeast.
SnapShots
Cards That Never Were 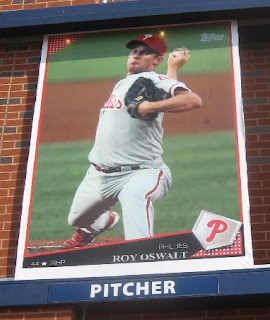 Roy Oswalt - notice that the 2009 Topps Style card specifies Oswalt as RHP rather then just P for pitcher. 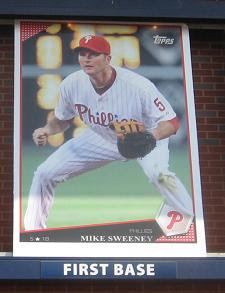 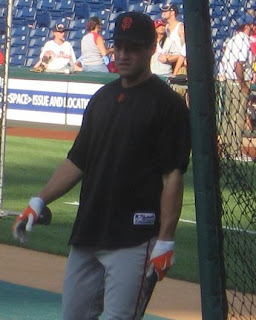 Pat Burrell was given a short ovation when he batted and cheered positively when lineups were announced. He got booed a lot more after he hit a line drive 2-run homer in his first at bat. 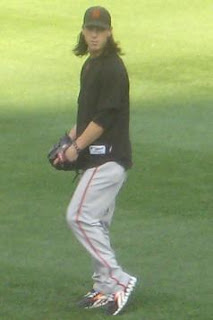 Tim Lincecum was doing his thing signing many autographs and interacting with fans. I also saw Buster Posey sign a couple of autos and Giants First Base Coach Roberto Kelly signed an item for a fan.

Game Notes
Roy Oswalt pitched 7 good Innings. He gave up 3 runs off 2 homers, Burrell's 2 run dinger, and a solo shot by Jose Guillen. Barry Zito kept the Phils off balance for the first 4 innings but ran into some trouble in the 5th and could not get an out in the 6th. Zito Left the game down 4-2 giving up 4 earned on 8 hits and 1 walk over 5+ innings.

The Phils would eventually put up a 5 spot on the Giants Bullpen in the 8th to turn a tight game into a blowout. A controversial bulk call, in which Jimmy Rollins would have gotten picked off otherwise, extended the inning - likely contributing to the Phils final 2 runs.

The Phils did something they have not done well all season. They got hits in key situations. It is a rare night when you will see the Phils score 9 Runs without aid of a Homer. Placido Polanco was key in that effort collecting 4 hits in 5 ABs. Rollins, Carlos Ruiz and Shane Victorino all had hits that plated multiple runners. Utley was the only Phils position player to not record a hit or score a run. He did reach once on an error and hit one flly ball pretty well to center.
For a Look back at a previous Game Report Click Here to read about the Team Phungo trip to see some A-Ball between the Salem Red Sox and Wilmington Blue Rocks.
The last Phillies Phungo Game Report was on a July game vs the Braves.
The most recent Phungo Game Report featuring the San Fransisco Giants was last September.

Yes me too on the Sweeney. He is a real recent addition. A few yrs back I am not so sure this would have happened. I love the LineUp card regardless, but it is always cool to see a new one.