I don't know much about Basketball cards, but yesterday the NBA and Panini had their Rookie Photo Shoot here are a couple of the shots from NBA.com. I would believe these are the photos that will be used on this years rookie cards, as they look pretty similar to ones I have seen on previous years cards. 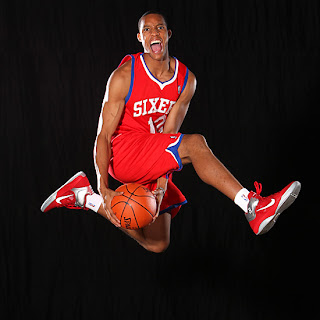 
It's a story not worth getting into now, but I follow the lowly Sixers because of where I live, but I am actually a fan of their chief Rival the Boston Celtics. 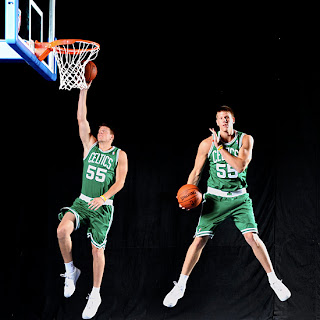 For a look at some of the other pictures in the group click here for the NBA.com photo gallery.

Does Harangody look like someone straight out of the '50's NBA or what? I actually think he was a nice pick for the Celtics at that point of the draft. Some of those picks are pretty cool.

Yeah I agree - on both points - there is definitely something old school about the shot and Harangody's look.

And to get anybody out of that spot who can contribute is always a bonus. I would think the Celts could find some minutes for Harangody. Hard to tell with a team with so many vets.