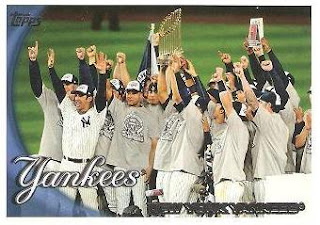 
A few weeks back I ran a poll to find out how different people found out about the death of Yankees Owner George Steinbrenner. The Results of the 15 votes cast were as follows:
5 - TV or Radio
3 - Word of Mouth
2 - E-mail
2 - Web Only Site
1 - On-Line Paper
1 - Sports Web Site
1 - Baseball Card Blog
I was a little surprised how many people found out about George Steinbrenner's death via the more traditional venues of TV or Radio. I had expected most readers of a Baseball Card Blog would be pretty -Net friendly and that the results of this small survey would skew in favor or the an on-line medium. However TV or Radio held their own.

On the other hand if you are enough of a baseball fan to read a baseball card blog you are probably also a sports junkie, which means the first thing you do each day would be turn on your tv and get the highlights. I think the timing of the news is noteworthy. The Steinbrenner news broke mid-morning on a week day on the east coast. This means anybody on the central-west time zones may have gotten the news while preparing for work, or driving to work.

Of course if we look inside the numbers one could say that the Internet related sources may have outranked TV and Radio since I combined those two mediums, but I did not combine several -Net sources. If you count e-Mail has an internet source then the -net beat traditional 7-5.

There are 3 comments regarding the news on the original Poll post. All three comments specified that they got their news via the web. The oddity to me here is that nobody felt it important to say I got it via TV or ESPN.

I actually got the news via e-mail, but the news came from a guy that sits next to me in my office. He sent an e-mail rather than tell me so he could attach a link. Is that word of mouth, email, or a website??

I would also like to note that I excluded newspaper and I hope a couple of people don't get upset with me for that. I figured that it happened so late in the new cycle for the date that it would not hit the paper first. However, I suppose it is possible that it could have been in print on the West Coast by press time.

Last fourth of July I spent on a vacation at a friends lake house in Northern PA. We didn't watch TV or check the internet for several days. On the final day, we had breakfast at a diner and I picked up the Sunday Sports section - News of Steve McNair's death was on the front page. I knew it was a rare moment when I would get sports news of that magnitude from the paper.

I still thoroughly enjoy the paper and hope that they don't die out, but I understand the dilemma the daily papers face in our crazy techno youth obsessed world.
Posted by deal at 9:41 PM