Today the Phils host the Mets in the rubber game of a 3 game set. To fill us in on the Mets and Mets cards, we are checking in with Paul's Random Stuff.

How do you feel about the Mets activities (or lack there of) at the trade deadline?
They made the right decision not to surrender prospects for short-term acquisitions. It may not have finished them off mathematically, but that 2-9 West Coast trip made it pretty clear that the 2010 Mets are not a playoff team. One or two players at the trade deadline really wouldn't have changed that. On the other hand, I'm a little disappointed that they didn't try to find out if they could have gotten a decent prospect for Pedro Feliciano.

Do you miss anything about the Mets playing at Shea Stadium?

CitiField is a wonderful new ballpark, but I do miss Shea. I loved the giant neon ballplayers on the outside of the stadium, and getting that first magical look at the field after walking through the maze of escalators and corridors to get to your seat. And since there were fewer distractions and more affordably-priced seats, it seemed to attract crowds that were more into the game.

What is the best 2 stadium Road Trip one can do for minor league stadiums in the mid-atlantic region?

I haven't actually visited both ballparks, but I'd suggest seeing the Lancaster Barnstormers and York Revolution. The Barnstormers have a beautiful ballpark, one of my favorites that I've visited. The distinguishing feature of the park is a merry-go-round out behind the left field seats. York is also supposed to have a nice field, complete with their take on Boston's Green Monster. If you get bored with baseball, you can check out Amish country and there's a neat-looking railroad museum in Strasburg that I'd like to check out sometime.

On your road trips you get a lot of cards signed, is there any particular set that is good for finding Atlantic League Players?

Any sets that have a high percentage of rookies seem to work well, if you wait a few years after they come out. The change in the rookie card rule after 2005 makes it a little tougher to find cards of Atlantic Leaguers now. Topps Total and the '52 Topps Rookies sets are my favorite choices. 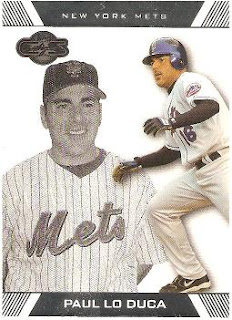 I never really thought about this before... Paul LoDuca, I guess. 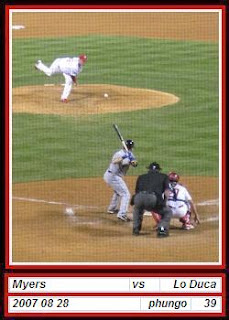 Phungo 5 Box Score A strong 5 out of 5. Paul nailed the Shea Stadium question. These are precisely the same issues I have about the new stadium in Philadelphia. I do love the new ballpark, but I do miss some things about the Vet. No matter how few people were how few people were in the old building you were almost guaranteed to have someone in your section keeping score. Now you can go the whole season without witnessing a scorebook.

Paul Lo Duca was also a player on the Phungo watch list for a while - more as a Dodger than a Met. He was on several of my fantasy squads. I can't remember what it was, but I think his career ended somewhat sourly and that sort of hurt my opinion of him.

The York/Lancaster area is sort of in my old stomping grounds and I do intend to hit both of those ballparks someday - Team Phungo just has to make the time.

For a Mets related P5 (including some interesting thoughts on the National) with Sports Locker Click here.
Posted by deal at 11:17 AM