I picked up three Retail Packs and one Rack Pack (36 cards for $4.98) and I think this provided a pretty good variety of the cards offered by this years Topps Release. 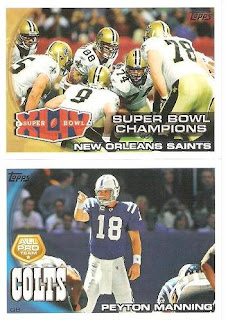 A nice Superbowl Card. The back provides the final score and the Saints half of the statistical box score. A nice looking Manning card, with an ugly-ass All-Pro logo. I don't know how about adding some Red White and Blue like the uniforms they where in the Pro Bowl. 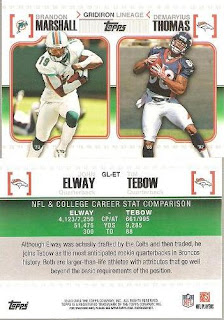 Lineage cards - I don't get the Marshall/Thomas card - This is the B-Side of the Elway/Tebow card - The Front of the card is featured over at A Pack to be Named Later. 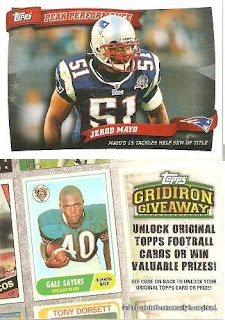 More stuff we saw in Topps Baseball - between the 4 packs I pulled two of the Gridiron Giveaway cards. Good to see Gale Sayers get some love.

The Tom Brady Card is a Yo Momma Card reprinted from 2002 Topps - This one happens to be with the original back, not sure if Football is doing both backs or not. In the middle is a Demaryius Thomas 52 Bowman insert. This a pretty sharp looking card and considered #4 of his 5 rookie cards in 2010 Topps. Finally a 75th anniversary Draft card of Ben Tate - Drafted in the 2nd round 58th overall by the Texans.

Enlarge these and you can see the B-side of the rookie card for CJ Spiller. I put a big Red Dot next to the line indicating this is Rookie Card 1 of 5 for Spiller. Like 2010 MLB Baseball, Football had Team Cards. Here I have the A-side of the Packers card and the B-side of the Redskins Card. I am not sure if Franchise History is part of the football set - between the 4 packs I picked up there were 70 cards and no Franchise History to be found - that's a shame because I liked those cards in 2010 Topps Baseball. 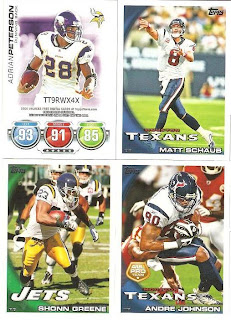 Various Star players - and local heroes. 2010 Topps Football has mostly action shots on the base cards. And I think the Photography is pretty strong.

It was also nice to see Topps figured out that the foil stamping around the player name looks much better if the name is in a white font rather than black.

I close with the Darelle Revis collection. Out of 70 cards I came out with three Revis cards. I don't know how many times the Jets wore the throwbacks, but most of the Jets cards that came out of the 4 packs had them in the throwback unis.

The Classic Matchup Revis/Moss card is a checklist.

The W store also had blasters on sale that contained 81 cards - I forget the exact configuration probably 7x10 plus one "bonus" pack of cards. the 81st "card" is a manufactured patch card I think.

Ok sometime this weekend I will try and get back to baseball posts.

For a look at the first pack of Topps NFL football opened by Team Phungo click here.

For a look at the pack opened at APTBNL click here.
Posted by deal at 10:25 PM