The Phils are in the middle of a 7 game West Coast swing which find them in LA to visit the Dodgers this week. Dodgers means checking in with Greg from Night Owl Cards.
1) What current Dodger player is the most overlooked by Topps?
It'd have to be Vicente Padilla. He isn't on a Topps or Heritage card this year. Just about all the other Dodgers are covered. 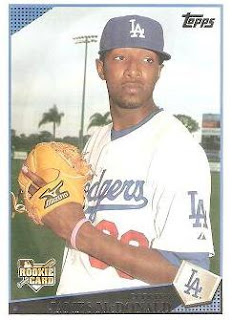 2009 Topps #208 James McDonald
2) Explain the Octavio Dotel move to me.
I don't think I can. Even if I could explain it in the most logical way possible, you would say it wouldn't make sense. The Dodgers traded two prospects that they once thought quite highly of -- James McDonald and Andrew Lambo -- for a set-up reliever. This is a move you make when you're one game out of the lead, not 8 out with three teams ahead of you. Even then I don't think you make the move. How has Dotel helped the Dodgers? Their bullpen is even more of a disaster. McDonald had issues but I was willing to work through them, he's young. Losing Lambo hurts. He's already hitting well in the Pittsburgh organization.
3) What is the Most annoying non-Sports Sports story 2010?
A-Rod 600
Ben Rotliesberger
Brett Favre
LeBron
Michael Vick
Tiger
Far and away Brett Favre. The story won't die. Unlike the others, it reappears every year. And it produces more stories about absolutely nothing than the other candidates combined. It has wasted hours at work since I'm forced to read these stories. I don't even like that I'm writing about him right now. If there are any aliens out there reading this, I am pleading with you to land in Hattiesburg, Miss., and take Brett Favre away so you can perform whatever examinations you must to figure out why this guy is like this. But please don't return him to us.

4)Am I correct in noting that there are no actual Night cards in the Night Owl banner??
Yup, no night cards. When I designed the banner, I just grabbed some cards I knew I liked. There wasn't any other thought that went into it. I'd change it, but it's too much of a process.
5) I love this one - and Night Owl will probably be sorry he ever turned me on to the concept, Give me 3 candidates for Blobs in the Dodgers Phils series.
Even though the Phillies will probably sweep, I can't predict a sweep.
Game 1: Brad Ausmus
Game 2: Jayson Werth
Game 3: Casey Blake
Phungo Box Score
4 out of 4 with a couple of Blobs pending.

NOC and I first swapped emails for this interview maybe two weeks ago when things weren't going well for the Dodgers. I think in there they had a mini-surge - More recently they have sunk back to the middle of the pack and cast off Manny Ramirez. It is looking like their chances to get back into the WildCard hunt are diminishing.

For a look back at a previous Phungo 5 on the Mets featuring Paul's Random Stuff click here.

If you want to see the Phungo Chat with Night Owl from 2009 click here.

Also related today's Manny Trade news, I would like to link to a posting I did on Ramirez in May of 2009. My attitudes towards Manny and steroids remain similar. Any time I got to see him play he had the potential to do something exciting - and that's part of why I go to the yard.
Posted by deal at 9:33 PM