Topps elected to include Mangers in 2015 Heritage. I have mixed opinions on this. Heritage only has 500 cards (425 if you don't count SPs). Not sure how many of those are used for Managers. I did a spot check and not all 30 managers are on the checker - I didn't see Joe Maddon or Mike Methany on the list. The Phillies were led by Gene Mauch from 1960 through 1968. Their peak was 1964 when the Phils won 92 games. Mauch went on to manage the Expos Twins and Angels Winning 102 games. Every Manager that has won more games is in the Hall of Fame.

The 1964 Phils are one of three teams that Mauch took to the edge of the World Series. Mauch led two Angels teams in the mid-80s that lost winner take all ALCS games. The 1982 versus the Brewers the Angles took a 2 games to none lead in the then 5 game series. They lost the subsequent 3 games including a 1 run loss in game 5 which they led at the top of the 7th. They then lost game 5 to the Brewers after leading 3-2.

Four years later the 1986 Angels faced Boston in a 7 game ALCS. The Angles were set to clinch with a three run 9th inning lead in a crazy game 5, but things didn't work out.

Don Baylor and Dave Henderson each hit 2 Run homers for the Red Sox. The Angels tied the game in the bottom of the inning sending it to extras. In the top 11th Henderson hit a sac fly for the game winner. The series returned to Boston and the Angels never recovered - losing games 6 and 7 by scores of 10-4 and 8-1. 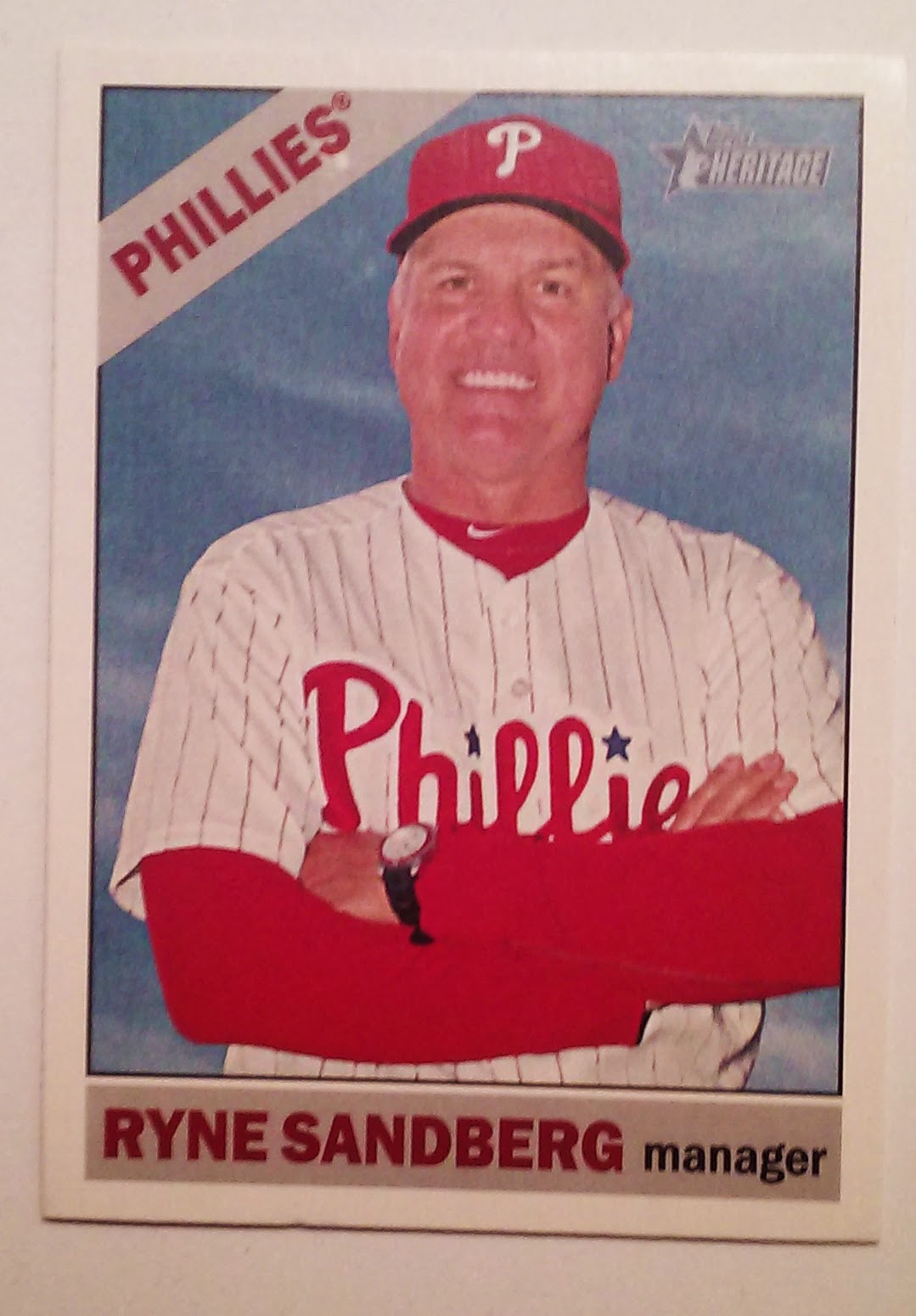 One of the few Phillies cards Topps matched up with the 1966 checker was the Ryne Sandberg manager card. Although they didn't do much to match up the shot. I have always liked the shot of Gene Mauch - not sure if what is in the foreground with the Phillies logo, perhaps a practice jersey stretched over a seat back or a bag. Regardless it is a bit different then your typical manager card of the era.

If you look closely, as the Phillies Room Noted,  Topps neglected to match up the capitalized font on 'Manager'. There is a big 'M' on the original, while Heritage goes with the little 'm'. The non-capitalized position is the format used throughout the set outside of the manager cards.

Ryne Sandberg is about to start his 2nd full season at the helm of the Phillies, No matter how successful he is here, I doubt he gets to manage the squad as long as Mauch's 9 seasons. Times have changed and the Phils just don't appear to have the talent that will get the team turned around soon enough for Sandberg to hold on for a long tenure.