Ken Giles had an impressive Rookie Campaign in 2014. He became a valuable set up man, pitching 45+ innings with a very efficient 1.18 ERA (336 ERA+). Giles performance was recognized with a 4th place finish in the Rookie of the Year voting. 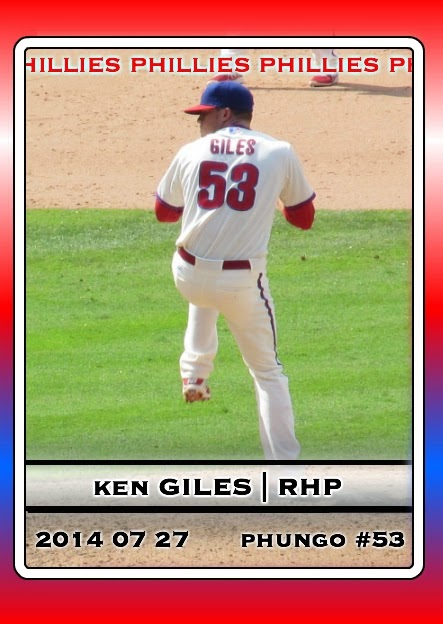 Regardless of Giles success the Phillies would likley looking at ways to move Jonathan Papelbon, and if that does happen GIles would inherit the Closer role.

But who is Ken Giles?

Prior to 2014 Giles had struggled throwing strikes and had some health issues. His control issues seem to have resurfaced during the early spring (5 Walks in 5 2/3 Innings).

During 2014 Giles was good enough for +2.0 WAR, however that was with a 5.8 K/BB rate. He is nowhere near that in his 5 spring training outings so far.

I am hopeful that we see something great from Ken Giles but based off his inexperience and uneven performance at lower levels I am projecting a 0.8 WAR season for Giles

This pix is from a Beautiful Sunday Day Game versus the Arizona Diamondbacks. Giles showed all parts of his game, He struck out a batter and gave up a four pitch walk prior to inducing fellow RoY Candidate Ender Incarte to ground into a double play. It was one of only 3 DPs that Incante hit into in 447 PAs.