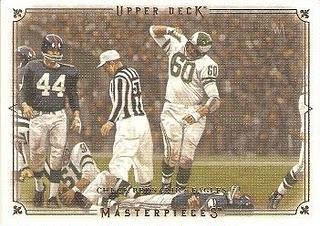 Known as "Concrete Charlie" Chuck Bednarik played both offense and defense - thus a second monicker "Sixty Minute Man".  He was a member of the Philadelphia Eagles last championship squad, clear back in 1960. And he was the man who knocked Frank Gifford down so hard he missed a year of football.

2007 UD Masterpieces was one of my favorite sets to release since I returned to the hobby. After the initial success of the baseball set UD came out with Hockey and Football sets in 2008. This fine Chuck Bednarik card featuring the image from the famous Frank Gifford play is just one of many fine examples of the great cards in Masterpieces.

Too check into our Hall of Fame profile of Bednarik click here. Rich Hoffman's piece for the Daily News can be found here.