Cole Hamels deservedly won the World Series MVP award. He won game one and was in line to win deciding game 5 before Rocco Baldelli homered off of Ryan Madson. Hamels was 4-0 over the post season which tied the record for wins. 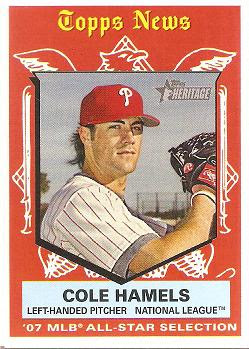 This is the 2008 Heritage All Star version of Hamels card. I like these cards - they closely mirror the original All-Star cards of 1959. The motif follows on the reverse side with the card number in a shield, a cartoon, and a short point of interest about the player. 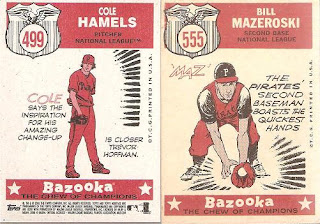 When Topps released the 1959 set the All-Star cards were present in the final High Number Series and are somewhat harder to find then cards from the earlier series. In the Heritage edition the cards are part of the regular release, despite the fact that Topps is planning on releasing more 08 Heritage cards in another product.

At one time the World Series MVP received the Babe Ruth award. The award was the subject of a Topps card in 1972. 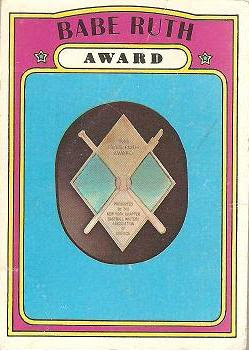 The Babe Ruth Awared is no longer presented, the last award winner was David Eckstein in 2002, when the Angels defeated the the Giants.