I know I am way behind with this one - It sort of got lost in the Phillies stretch run.

So yes, I opened this box a while ago and just wanted to go over the stats just in case anyone out there is still working on 08 UD Goudey. I don't remember the configuration 8 packs of 8 it looks like. 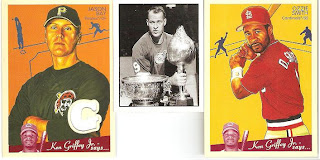 Here are the vitals:

53 Base - Five of which were duplicates of 4 hobby packs that I had bought previosly - that seems a little high. 1 Phil, Hamels, which I needed. 7 of the base were retired stars.

08 Goudey fell in the like but not love category for me, I had opened a couple of hobby packs over the summer and generally liked the product enough and that convinced me to get a blaster to gather some additional base cards.

The only disappointment was that 5 of the cards from the blaster I already had in a pretty small collection of maybe 25 cards from 4 hobby packs. Otherwise I was pretty happy, the inserts in this blaster were all decent, Jason Bay isn't the flashiest card in the Materials set, but he is a player I root for so thats definitely a nice addition to the personal collection.

I am also sending out a reminder that Sunday is Spot the Sig! day. This weeks STS is scheduled to go up around 9:30pm Eastern
Posted by deal at 11:11 AM