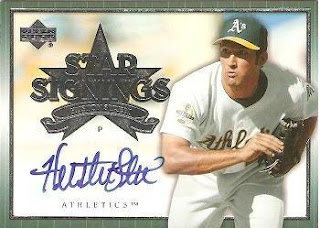 UD 2007 Star Signings SS-HS Huston Street
The first Spot The Sig! auto was penned by Huston Street formerly of the Oakland A's and now the newest member of the Colorado Rockies. The first person to identify the Auto was Mark of Stats on the Back, who may have the best banner in the Card Blogoshpher. Joe over at Cardboard Addiction correctly figured out that I have never seen Huston Street pitch. Apparently this card was a little easier to figure out than I thought as it took Mark all of 13 minutes to ID the auto. Mark gets a double and Joe gets a walk.
Star Signings are part of the 2007 Upper Deck Series 1 and Series 2. Huston Street is one of 63 subjects in Series 1. The most desirable auto in the set is likely the short printed Albert Pujols card.
I picked up this card off of ebay, most likely while I was looking for something else, but thought it was a pretty good deal. I have an ongoing project to collect autos representing every major league team. I may have targeted this card for that reason. Since Street was the closers for the A's who don't get a ton of national recognition his autos tend to come pretty cheap. According to my records the card went for $3.41 incl shipping.
I try and see as many different teams play as possible, with the intention of seeing every major player of the era at least once. But catching the AL West teams in Philadelphia is pretty tough. The A's have only visited Philadelphia once that I remember. When the A's came to Philadelphia it was a big deal because not only was it an inter-league match up but it meant the return of the A's to the city where they originated as the Philadelphia Athletics. There are still some A's fans in the area, because of the teams former affiliation with the city. There is even a Philadelphia A's Museum located in a city suburb. At some point I plan making time to visit the museum, but have not yet.

Save The Sig! Scoreboard
No one has any runs yet but...
Stats on the Back - Representin those stinkin Mets no doubt - Has a man on 2nd.
Cardboard Addiction - posting for 'The Nation' - Has a man on first.

Everybody else is On Deck.

For further information regarding the Phungo Spot the Sig! contest click here and join the party - you just may find yourself with a stack of cards come spring training!
Posted by deal at 9:26 PM