At the time Veterans Stadium was built there was a controversy over the naming of the stadium. This was during the era of the Viet Nam war and ultimately Philadelphia city council chose the name Veterans Stadium to honor of the Veterans of all wars.

In 2008, the country is once again at war and on this day America honors it's Veterans.

Veterans Stadium was the Home to the Philadelphia Phillies from 1971 through 2003. The Vet was demolished in the spring of 2004. The photo below is of a Marker placed where Home Plate was once located in Veterans Stadium. 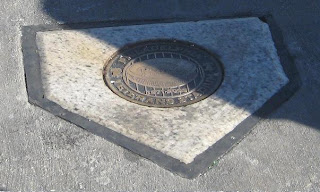 I made one visit to Veterans Stadium in my lifetime. It was back when my brother lived in N.J. I still remember the details. Phillies beat the Pirates 7-1. Danny Jackson was the winning pitcher. Pete Incaviglia hit a HR. We had seats in the upper right field deck. There was this guy that did nothing but walk the entire concorse of the stadium the entire game.

Great photo. I didn't know they had the plate out there.

I grew up in south jersey and spent a lot of time at the Vet. Too bad our new stadiums today don't pass on the $$ and rightfully name their new park.

JRJ, I ran into the marker by accident. Since it is in a parking lot I am sure it goes unnoticed unless you use that lot. But on the day of the Phillies parade the Lot was blocked off so spectators could watch the festivities on large screens from that lot. I just wish I would have thought to take pix of the plate not in the shadow. maybe next year.