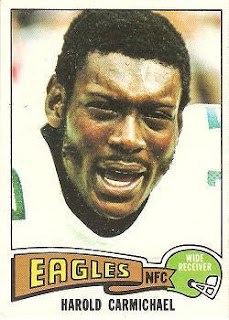 For Pro Football Sunday Phungo would like to recognize Harold Carmichael and Al Wistert. Both football players were recently honored with induction into the Philadelphia Sports Hall of Fame as members of the 2008 class.

Harold Carmichael played for the Philadelphia Eagles from 1971-1983, during his career he caught 590 passes, 79 for touchdowns. He was likely the greatest receiver in Eagles history, he played for the Eagles 1980 Super Bowl team and was also elected to four Pro Bowls. Carmichael is also a member of the NFL 1970s all-decade team.

The 6' 8" receiver was a tall target for Ron Jaworski and other Philadelphia QBs. He was also durable and played in 162 consecutive games from 1973-1982. At one point Carmichael caught at least one pass in 127 consecutive games, which was the NFL record until 1986.

Carmichael remains in the Eagles organization as the Director of Player Programs. His duties include assisting rookies and new players with acclimating themselves to Philadelphia NFL. He also helps with coordinating Alumni activities.

Al Wistert played his entire career (1943-1951) with the Eagles as a two-way lineman. He was a member of both the 1948 and 1949 NFL Championship teams. Wistert also earned All-Pro honors eight times and served as the Eagles captain from 1946 through 1950.

Wistert is still living at the age of 87 and was able to make it to the Philly Sports Hall induction ceremony. He was able to visit the Eagles practice while in Philadelphia.

I would also take this time to mention that the NFL Alumni Association recently has won a lawsuit that may allow them to have better pensions and medical benefits. The ruling will likely be appealed, but at least temporarily the players of yesterday, who the NFL was built upon, may be able to reap some of the benefits of the cash cow that the NFL has become today.