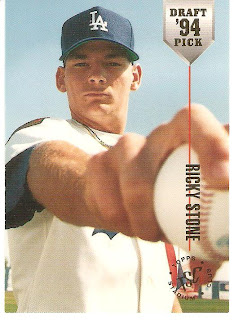 Paul's Random Stuff initially reported on the plight of Ricky Stone and his family last week. I think the story is worth repeating here. Stone has recently been diagnosed with a malignant brain tumor. Ballplayer's on the fringes of the major leagues can have nomadic periods and unfortunately this was the case for the Stone family (Wife Tracey and two children) at the time of his diagnosis. Tracey was scheduled to take on a teaching position, however, the family was temporarily without insurance.

To defray some of the medical costs of Rickey Stone's recovery, Alisa and Nelson Figueroa (former Phillie, more recently a Met) have organized an online benefit auction. The auction runs through Sunday on ebay. There are some really nice game worn items and lots of autographed baseballs donated by Major League Baseball Players and the Players association. The items also represent many different teams across the league.

Hopefully the benefit goes well and the Stone's can eventually resume a more normal life.

I would also like to mention that near as I can tell ESPN has given this story NO coverage. Go ahead google "ESPN Ricky Stone Tumor". Lots of stories (and a handful from blogs) , yet not one regarding the current state of Ricky Stone's health can be attributed to ESPN. Meanwhile the off-the-field stories of Lawrence Tynes and Jimmy Connors ran across the bottom line ad nauseam during the last few days.

I am not disputing that either of those stories is of some import, I only believe that the Stone story is deserving of it's own attention from a corporation that considers itself a major outlet of sports news and information. In short it bewilders me that the best place for me to get this information is from fellow bloggers who have a common interest in baseball cards and memorabilia.
Posted by deal at 10:23 PM