I have been hesitant to start a weekly feature as I don't want to put myself on a schedule, but I thought featuring a Hall of Famer each week would be a good way of anchoring Phungo during the void of the baseball off-season. Yes, I do follow other sports (Flyers Hockey, College Hoop, PSU and Minnesota Vikings Football) but Baseball is my primary love. The goal each Thursday or Friday will be to come up with a HOF player who is interesting and maybe even timely. The HOFs will not be restricted to baseball but will likely be baseball centric – although they in fact may not be in any Hall of Fame - well other than my own. Former Phil and current Phils broadcaster Larry Andersen is in my personal Hall of Fame, just because I think he is a helluva funny guy - my blog my rules – Autocracy rocks!!

But for week one the Hall of Famer, as mentioned above, is Jim Bunning. Yes a Baseball player and an actual member of the Baseball Hall of Fame. 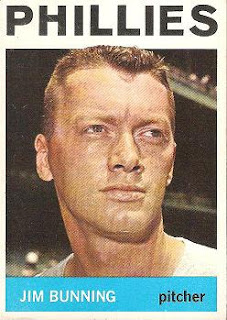 This is a good week to recognize Bunning, who threw out the ceremonial first pitch in game 5 of the 2008 World Series. 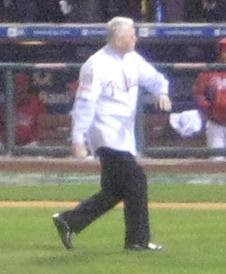 Bunning is also a US Senator and this is an election week, although I will note that I can't say that I agree with many of Jim Bunning's conservative views. The man does have one of the more varied Wikipedia pages you will find.

Bunning had two stints with the Phils, playing with them for 6 years between 1964 and 1971. He had 224 career wins including a perfect game on Father's Day of 1964 and was an all-star in 7 different seasons.

Bunning’s number 14 is retired, which is fortunate, because it helps the Phillies avoid the awkward question of retiring Pete Rose’s #14.