This week Mike Mussina formally announced his retirement from Major League Baseball. The fact that Oriole's Card "O" the Day, 30-Year Old Cardboard, Dinged Corners, and Fielder's Choice have all written about his retirement tells us a lot about Mussina's impact. 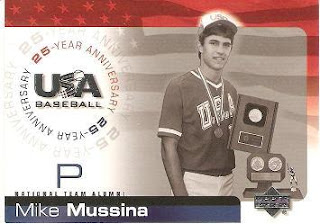 I have always been a fan of his for several reasons. During the mid 90s he was a key cog in the Orioles staff and since then he has been the steadiest pitcher on the Yankees staff. His 270 wins rank behind only Maddux, Glavine, Clemens, and Randy Johnson among pitchers from his era. He has finished top 10 in his league in wins 9 times, top 10 in ERA 11.

Despite never winning a World Series ring he did pitch fairly well in the post season. He played for nine different playoff teams. One of Curt Schilling's (11-2) two losses is against Mussina. Same for Josh Beckett (7-2 in the playoffs). And Mussina left the critical fifth game of the 2004 ALCS with a lead, in the 7th inning against Pedro Martinez, before Mariano Rivera blew the save.

Beyond the post season he provided plenty of other great moments. I can still remember watching his near perfect game on Sunday Night Baseball in September of 2001. And this year he started and won the last game I will ever see at Yankee Stadium.

Yes he may be Mr Almost. But he was not just pretty good. He was really really good.

I would like to close by mentioning that Mike Mussina is considered by many accounts to be a real decent guy off the field. Each winter he returns to his roots in rural Central Pennsylvania to help out in his community. Sports needs more stories like this and we need to remember and honor those stories.

I would like to also remind everyone that Sunday is Spot The Sig! Night. I expect to post the next Sig around 10:30 tonight. Stop back then and see if you can guess the Auto!
Posted by deal at 11:08 AM