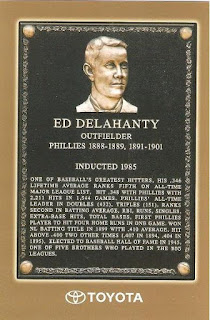 Ed Delahanty was elected into the Baseball HOF in 1945 by the Veteran's commitee. He played for the Philllies from 1891-1901 and for the Philadelphia Quakers prior to that. During his career the Left Fielder amassed 2596 hits, a .346 Batting average, and 455 stolen bases. He finished his career with 101 home runs - at the time the record for all time home runs was only 138, held by Roger Conor. On July 13th 1896 Delahanty became only the second player to homer four times in a game.

Delahanty was from a Cleveland Ohio family which put 5 boys into the Major Leagues - Ed, Frank, Jim, Joe, and Tom. They are the largest group of siblings to play ML Baseball. The brothers combined to play 41 seasons and over 3500 games.

Ed Delahanty died at the age of 35 under sketchy circumstances in the waters of Niagara Falls. This incident is detailed in the Ed Delahanty Wikipedia entry, which was also the source for much of the information for this post.
Posted by deal at 10:17 PM