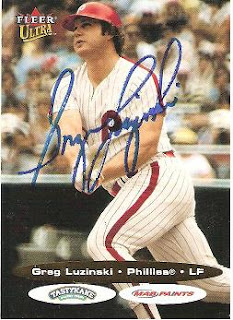 Congratulations to Dayf for being the first to Spot the Sig. Should have known he would come through. Stay tuned for next weeks Sig - If I get enough support there may be a contest in the works. More on that below.

This card connects two eras of my Phillies Phandom. The Phillies gave each fan, who attended the final Veterans Stadium game in 2003, a set of 12 cards commemorating the All-Vet team. The Bull was the All-Vet representetive for the Left Field postion. I suppose it is fitting that Dayf was first to figure out this Auto, since the Braves defeated the Phils that day 5-2. After picking up this card at the last game at the Vet, I also took it down to the first game at Citizens Bank Ballpark where Greg Luzinkski signed it out front of the brand new Bull's Barbecue.

Yes, similar to Camden Yards in Baltimore, The new Phils park has a Barbecue area beyond centerfield. In Baltimore they have Boog's Barbecue presided over by "Boog" Powell. The Phils have Bull's Barbecue, with Greg Luzinski at the helm. The Bull has become an ambassador for the Phillies, appearing in the area and on TV and radio a good bit. And of course he also puts in time at Bull's Barbecue which is located on Citizens Bank Ballpark's Ashburn Alley. I find Barbecue a bit messy for my taste on most game days but have enjoyed a few sandwhiches there over the years.

Anyone on the late 70s and 1980 World Championship Phillies teams are among the first players I can remember. Of course Luzinski is among the most memorable of this group - Big dude lots of pop and of course that Polish last name. One of my favorite moments of the Phils run in 1980 is during one of the post season games Luzinski had been removed for pinch runner Lonnie Smith who stayed in the field. Howard Cosell was the color analyst for the game and had apparenly forgotten about the replacement. When Smith eventually came to bat in Luzinkski's spot in the order, Cosell said "And now the question is 'Can the Bull do it again?'". I will post a card here eventually but in case you don't know, Lonnie Smith don't look much like the Bull.

I am sure Cosell was only looking off his scorecard but it was a moment that still remains funny to me today.

And since this Card commemorates Veterans Stadium, I also find it appropriate to post here during the week of Veterans day.

I plan on running Spot the Sig weekly throughout the Baseball off-season. As of now I would like to get the next STS up on Sunday night. I am thinking of having a contest that will run the duration of the feature. Probably will award a stack of cards to whomever spots the most Autos during the contest.
Posted by deal at 9:08 AM

I never would have guessed that card