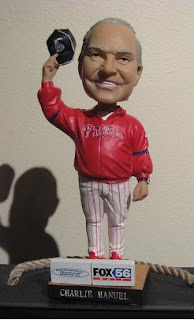 Sports Card Info recently ran a contest and you didn't even have to do anything crazy like ID a scribbled autograph to win. You just had be lucky enough to be picked at random and I was!

Big thanks to Andrew over at SCI for running the contest. I have a small collection of bobble heads. I believe I only have 2 from the 2008 World Champs. Manuel and Brad Lidge - No Utley No Howard. They are not impossible to get but I generally only pick them up at games that I go to, but most bobble head nights are sold out well in advance these days. 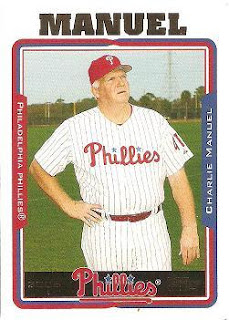 Like many bobble heads I am not sure I could identify this one without a hint. Charlie Manuel as slimmed down a good bit from the photo above but even the slimmer version of Charlie doesn't quite match the bobble head. Perhaps it's because Manuel frequently looks a little bewildered out there, while the bobble head looks like the Charlie that just won a World Championship and he is wearing a genuinely happy smile.

Thanks SCI and Go Phils - less than a month till Pitchers and Catchers!
Posted by deal at 9:23 PM