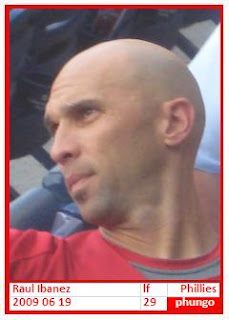 We here at team Phungo are pleased to announce the release of the 2010 edition of Phungo Cards.

For those of you unfamiliar with Phungo Cards you can read more about them here where we debuted the 2009 set.

This year's set is a bit smaller then the 2009 set at 52 cards, as opposed to 64 last year. There are also 8 non-numbered Black Frame inserts this year - last year there were 11.

There are a variety of reasons for the smaller set. The number one issue, as with most things was a lack of time. I just didn't have as many opportunities to get to the ballpark this year, and I procrastinated on several tasks.

Overall I am glad to get a set together for 2010, but was disappointed with several aspects of the cards. In general the quality was down. Mostly because I didn't get to enough games and many of the games I went to were night games which were not as conducive to photography. I never figured out enough Photoshop to quickly make a lot of images. In the 2009 Phungo Card set I used a lot of my best photos from years past so the ones that were left were basically rejects. And in the end I had a deadline of basically now and that led to me rushing some aspects of the project.

The first card that I am presenting from the 2010 set is of the Phils big 2009 FA signing Raul Ibanez. If you remember the 2009 cards they are very few changes. I flipped the area for the Card number and the "phungo" logo. This years phungo logo is white or light colored on a darker background. The Date the photo was taken remains on the card. I have used the specific position (LF in this case) rather than the generic OF for outfield.

The picture of Ibanez was taken on June 19th when he was on the DL. At the time Ibanez was having an MVP season. After that the 36 year old outfielder aged tremendously. His BA dropped 70 points in a second half which also saw him hit 10 less homers. Regardless he ended up posting pretty solid numbers for the season and I am hoping that his second half crash was due to nagging injuries rather than aging out of the game.

I hope you enjoy the 2010 Phungo Cards because you will be seeing a lot of them over the next couple of weeks.
Posted by deal at 10:21 PM

Excellent! Looking forward to another fine year of Phungo Cards.

And I've just received my first pack of 2010 Phungo cards, along with some added bonuses. Thank you!