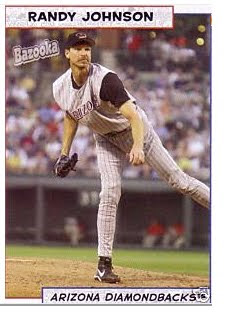 I stole this picture off an ebay listing - This card is on my non-Phils want list, and I just haven't found it yet. NicoLax24 made a compelling argument for this being a Cardinals game but I am pretty sure it is an Orioles game.

The game that NicoLax24 Referenced was a Playoff game that occurred on October 24th 2001 between the Diamondbacks and Cardinals. Unfortunately the game was played in Arizona not St Louis. This photo was taken at a Diamondbacks away game - check the D-Backs unis at dressed to the nines.

I am pretty sure this game occurred on June 8th 2004. The Diamondbacks blew out the Orioles 8-1 in a game that I attended. I have been to Camden Yards several times and there is an area in the Right Field power alley that serves as a dugout for some sort of stadium personnel. Those folks in there are wearing Orioles Orange, not Cardinals Red. There is also a sign that marks the OF depth as 373 feet there, and you can see part of that sign behind Mr Johnson.

The Unit pitched 11 games at Camden Yards, but only one of those was as a Diamondback and that game was on June 8 2004.

Since this game is among the Phungo Games that I have attended this card is also on my want list for Phungo Games.

Sources and Links
Dressed to the Nines
Baseball-ref
Posted by deal at 9:25 PM

Wow, great analysis. That's awesome that you were at that game. If I ever stumble upon that card I'll be certain to send it your way.

I think the reason why I haven't chased anything from any games that I've attended is that my team has lost every single game I've attended. I guess that's only 3 games, but it's still frustrating.