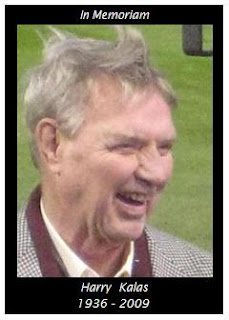 The first card in the Phungo set is this non-numbered Harry Kalas card. I chose the simple black border with Kalas' Birth and Death dates. Nothing more was needed.

This picture was originally taken on October 29th 2008 only a few hours before Kalas would call the final out of the 2008 World Series. For me it never gets old.

There is one other Harry Kalas Card in the 2010 Phungo Set. 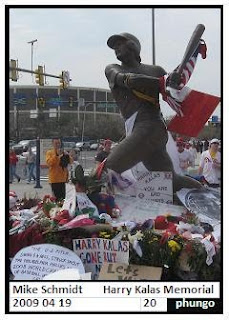 The Schmidt Statue was created by Zeno Frudakis as were all four statues (Richie Ashburn, Robin Roberts, Steve Carlton) at the Phillies new ballpark.

Today is Martin Luther King day and I would also like to direct you to this link which shows a Frudakis work in progress of Dr King.

These are the 2nd and 3rd Kalas Phungo cards. I created one for the 2009 set which you can see in this post which followed Kalas' death last year. The post details one of my favorite brushes with greatness.
Posted by deal at 2:11 PM