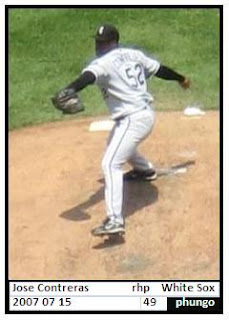 Sometimes things just go your way. I only starting publishing Phungo Cards two weeks ago and now it appears one of the players I had created a card for has signed with the Phillies.

I think this is only the second time this has happened. In 2009 there was a Phungo Card of Pedro Martinez.

I am a little surprised this card didn't make the cut for the 2009 set. It's a pretty sharp looking action shot, which is hard to get. The amazing thing is I just dug through the raw photo for this shot and it was taken from the upper deck at Camden Yards without the use of a zoom. Thats what a sunny day can do for you. Of course the sun hurts you when photographing the home team - You can nothing but white out reflections of the home whites.

Contreras is expected to be in the bullpen mix for the Phils performing in the role Chan Ho Park fulfilled for the Phillies in 2009 - inning of relief and spot starter.

I hope Contreras is as good as Park was last year. Chan Ho played a critical if unsung role for the 2009 NL Champs. 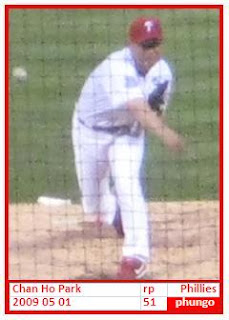 Yes, Jihoon the card numbers I use are generarlly the players uniform numbers when ever possible.

This year's set contained only 52 cards so I gave Park the card number 51.

Contreras is card number 49 because 52 was given to a different player.