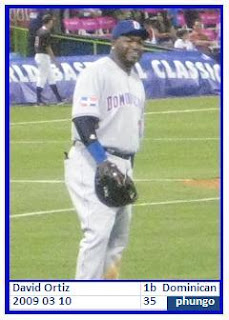 Hispaniola is the name of the divided island shared by the countries of Haiti and the Dominican Republic.

David Ortiz hails from the Dominican as do 492 other gentlemen who have played Major League Baseball. One of those players is Miquel Tejada who has been involved in relief efforts for the disaster stricken country of Haiti. According to Baseball-Reference there are exactly ZERO players of Haitian birth that have reached the Majors.
That is a somewhat unbelievable disparity 493 to zero. The countries are basically in the same area and presumably of similar climates, but their history beyond the 20th century is significantly different.
I am not naive enough to believe that MLB success or even presence equates to social and economic success and importance (All of Europe as yielded virtually no players either). However I don't think that the differences in this case can be ignored. From what I have learned Haiti's recent history has been filled with cycles of political corruption, tyrannical leadership, intellectual exodus, and just plain bad luck. According to Wikipedia The Dominican's per capita income is roughly six times that of Haiti - That would be like the average New Jersey resident making 6 times what a Pennsylvanian makes. For the record according to wikipedia the two states with the largest income disparity in the US are Maryland (70.5K) and Mississippi (37.8K) which is not even double for states that have significantly geographic and environmental differences.

Hopefully Haiti can recover and turn their fortunes around. I would love to see Haiti become another hotbed for Latin American prospects.
Posted by deal at 9:53 PM