To celebrate the Phillies World Series victory I hit the card show at the Concorde Mall outside of Wilmington Delaware last weekend. I perused several dime boxes, here are some of the Highlights. 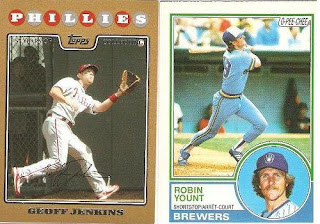 I picked up bunches of Phillies and some cards of Hall Of Fames like Robin Yount. The Jenkins card was a particular surprise as it was out of the recently released Updates and Highlights.

I also got some some good looking star inserts of players like Vlad, and Griffey. 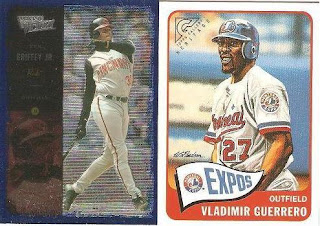 The Griffey Foil doesn't look good on the scan but is a sharp card. I really like the Gallery Heritage cards and will keep my eyes open for more of these.

I picked up a half dozen cards from last years Wal-Mart Trading Card History. This is a set I keep looking for on ebay and was happy to find a couple at the show. As usual I picked up some Heritage cards of various Stars like Bernie Williams from several different sets Bowman, Topps and UD Vintage. 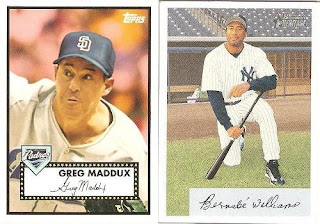 The best for me was finding thirty 08 Topps inserts in a dime bin including 20+ All-Star Rookie Inserts like the Strawman. I also picked up a couple of Fleer Flair from different years - Always a favorite of mine. 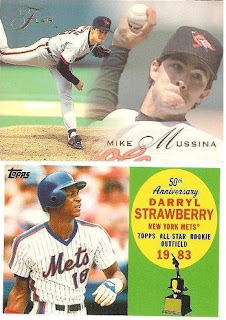 Obviously I was pleased with all my nickel and dime box finds. Filling out the 08 inserts was pretty awesome. I have also been working on the 1959 Topps base set and was able to find 5 commons pretty cheap.

There were maybe 20 or 25 tables with a wide array of items. The dealers had apparently had a good weekend, business likely bumped by the recent Phillies triumph, and certainly did not complain as much as they do at a typical show.

$25 for a fun day at the card show, very worthwhile!

Any day you can pick up some '59 cards is a successful day.

You can't beat a good card show. They aren't as easy to find any more.