I find my collection to be quite varied. I am a Phillies fans and would consider myself primarily a team collector, but I am also presently trying to build some sets, collect autograph cards, and star cards.

These are all among things that other hobbyists collect. One thing that I collect which I have yet to see anyone else write about is cards representing games that I have attended.

Perhaps this is because it is somewhat narcissistic. Yes I am geeky enough that I have created a file of Retrosheet/Baseball-Reference Box Scores of every game I have ever been to - all 201 of them. I collect cards that feature any of those games – sometimes I call them Phungo Games as in “Cole Hamels had the most Wins in Phungo Games this year” The only time I have even seen anyone mention anything similar is someone on the Bench was building a set of Yankee Stadium Legacy cards from the games he saw there with his father.

So yes some mirror sets that many other collectors loathe, I actually have a use for. 2007 Topps Generation Now has a whole bunch of Ryan Howard cards representing HRs I saw him hit – I have a couple of these and some still on my want list.

And Moments and Milestones – the checklist is far too large for me to think about building a want list – but I do have a few:

And there are gems on the backs of some cards: 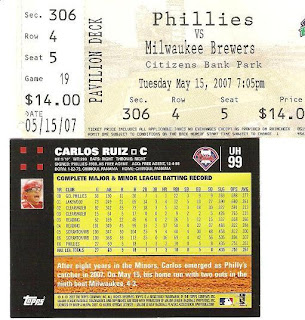 But the true treasures are cards that I have identified the photo to be from a game I have been to: 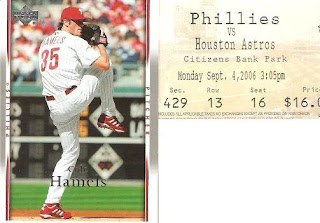 There is some true work that goes into Identifying these cards. One might ask how the heck are you sure that the Hamels card is from that specific game. Well here goes: The card is a home day game. That much I can identify from just looking at the card. Cole Hamels did not reach the majors till 2006 so this has to be from an 06 game since it's an 07 series 1 card. Then I look at the scoreboard – The Orioles were at the Angels (They did not play the Dodgers in 06) The only day game which Cole pitched while the O’s were visitng he Angels prior to 2007 was on September 4, 2006.

There are also cards of events I have seen that are related to players that are not Phillies.

The scan is a little hard to read but the Gonzo cartoon mentions that he hit his 300th homer on June 5 2006.

I collect these also – You put them next to the ticket and you have a pretty cool little item. 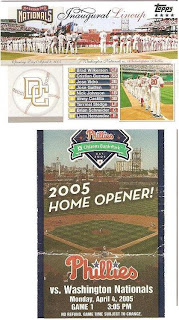 Topps got the date incorrect on the card, but I still think it's a cool card.

Oh and yes prior to this year I was at one game at Yankess Stadium, June 30th 1998. If my calculations are correct that is YSL #5835 Tino Martinez. That card remains on my want list.

Within my binders I also have pages of cards related to the Phungo games. For instance I have a collection of every player who I have seen hit a grand slam. Yes most of these players are pretty common like Darren Daulton or Bobby Abreu and now I will be adding Shane Victorino to the Grand Slam page. The ones that hurt are the those hit by the opposition.

I find it to be a way of tying together my card collection with the experience of going to the game. And it also brings some personal value to cards that may otherwise be considered commons.

That is a cool idea for a collection!