The bounty from the World Series wager with Fielder’s Choice has just come in. Dave sent me a couple of packs from two pretty nice products, Donruss Threads and SP Authentic. I had not seen any of these cards other than via web postings by various card bloggers.

Dave sent 3 hobby packs of each, which was enough to give me a good sample of both products. Both have a similar price point – Donruss Threads is a new product and did have a fresh quality to them. While the SP authentic felt like a lot of other 08 UD releases – All the UD card backs look similar regardless of what line their from.
Donruss Threads also came through with a pretty sweet Game Used card! And a healthy mix of of prospects and former players. 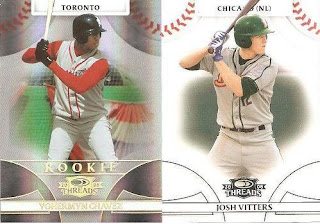 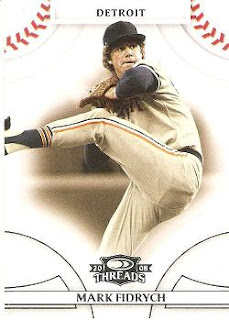 The prospects were about evenly split between high and low level prospects. The three packs yielded top prospect Vitters from the Cubs, the Braves Jordan Schafer, the Brewers Mat Gamel, and Boston's Lars Anderson. I believe the Chavez card above is a gold variation.
Donruss has been away for a while though and has some issues, can you spot an error on this card? 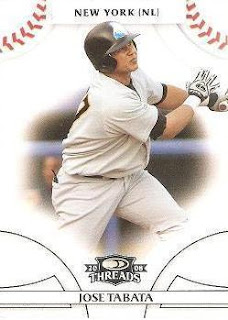 2008 Donruss Threads #81 Jose Tabata
SP authentic presented a nice selection of current stars. Among them were a former Phillie that hit a lot of Homers and also a new Phillie who only has one homer but it was very memorable. 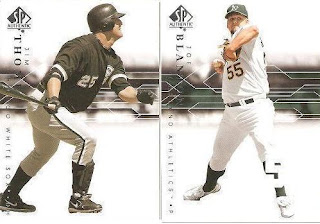 The Player photo is set off by being slightly raised slightly and somewhat shiny. The cards also features the players uniform number in the lower right hand corner in white. It isn't very visible because it is on a white background, but it is an interesting affect. On the right the number overlaps Blanton's left leg.

Each SP pack came with an insert. 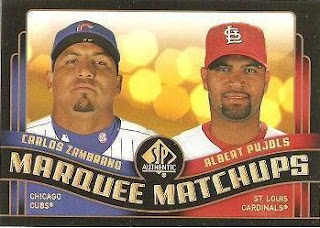 2008 SP Authentic Marquee Matchups #MM-10 Carlos Zambrano vs Albert Pujols
The last card in the 3rd pack of SP Authentic I opened was the J-Roll card. 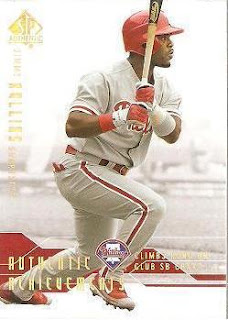 2008 SP Authentic Authentic Achievements #AA-29 Jimmy Rollins
Similarly the last card in the final pack of Donruss I opened was a Phillie. 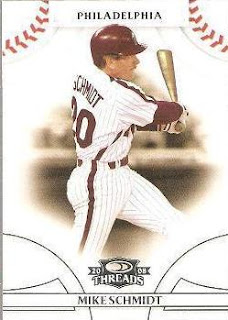 2008 Donruss Threads #38 Mike Schmidt
Pretty cool – and I think it brings us full circle on Dave’s guest post from last week.
Here are the specifics

Team Phungo would like to Thank Fielder's Choice and look forward to the Phils facing the Rays in a future World Series.

I had wondered why Jose Tabata kept showing up on Mets searches on eBay... until I actually clicked one of the auctions and saw the scan.

Yeah I was all confused because on the back it gives his minor league info as Altoona. And I am like they aren't a Mets affiliate - then I had to do some research - so I guess when he got traded maybe they changed the league but not the city. or they just had the team wrong all along.

Tabata was traded from the Yankees to the Pirates in the Xavier Nady trade this summer.

I'm glad that you got the cards and that you at least got one hit with the Fisk card!