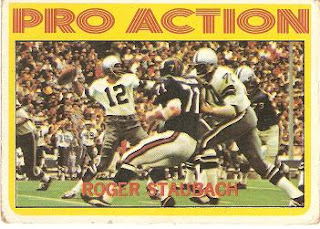 This week we take a break from all of the Philadelphia Sports Hall of Fame posts and honor Hall of Fame Quarterback Roger Staubach. In addition to all of the Turkey and harvest related traditions that surround Thanksgiving, a full and now fuller day of football has also become part of the tradition. Much to my dismay the player that we watched each Thanksgiving during my formative years was Roger Staubach. He was nicknamed "Roger the Dodger" for impressive scrambling ability. Staubach, because of his Navy commitment, did not become a starting QB until he was 29. Yet there was still time enough in his NFL career for him to lead the Cowboys to two Superbowl wins and toss 153 touchdown passes. Staubach was inducted into the Pro Football Hall of Fame in 1985.

As a Minnesota Vikings fans I have harbored much dislike for the Cowboys since 1975 when Staubach launched a TD pass to Drew Pearson that ended the Vikings season in the divisional playoffs. In researching this article I found out that according to wikipedia that TD pass is the first use of the phrase "Hail Mary" to describe a desperation throw at the end of a game. I found this hard to believe as I always assumed this usage of the term had been in the language since long before I was born.

I still carry a loathing for the Cowboys....one convenience of Terrell Owens joining the team is that I can root against both T.O. and the Cowboys at the same time, which I plan on doing this Thanksgiving day.

I don't know what was funnier watching that game, seeing Minn outdoors for a home game or seeing Robert Newhouse listed as 5'10"!